Several high-growth software companies fell sharply on October 16. One company in particular caught my attention due to its poor fundamentals and the downward sloped trend channel that has formed on the chart in the last three months. The company is Twilio (NYSE: TWLO) and it fell 4.7% on the sixteenth. Unfortunately for investors, it looks like there is more downside risk on the horizon.

Looking at the daily chart we see that the stock just hit the upper rail of the aforementioned trend channel and the 50-day moving average is in close proximity to the upper rail. This means there are two layers of resistance the stock will have to fight through if it is to stop the downtrend. 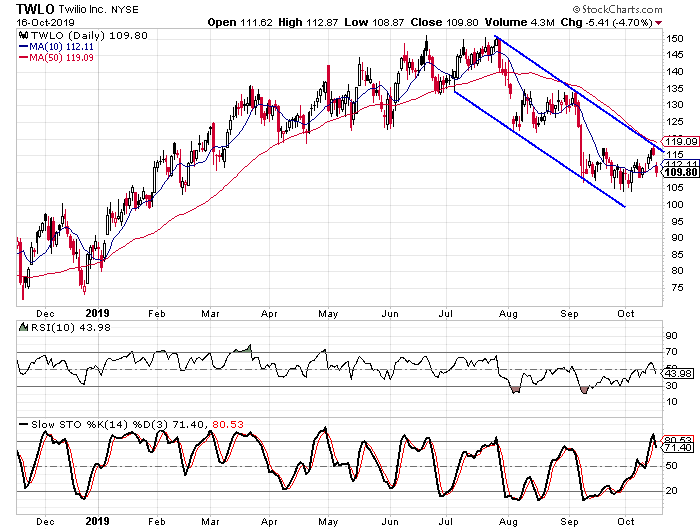 Looking at the fundamentals for Twilio, the company has been able to grow its sales, but it hasn’t been able to grow its earnings effectively. Sales have increased by an average of 56% per year over the last three years, but earnings have been flat during that same time period. Part of the reason for that is the management efficiency measurements are incredibly low. The return on equity is only 2.9% and the profit margin is a paltry 1.4%.

Twilio is expected to report earnings again on November 4, so you will want to keep that in mind. Analysts expect the company to earn $0.01 per share for the third quarter after earning $0.07 in the third quarter of 2018.

The Tickeron Fundamental Analysis Ratings show that Twilio is below average in every category. The Valuation Rating is at 56 and indicates that the company is fair valued in the industry, but above the 5o mark. The Price Growth Rating for Twilio is 65, indicating fairly steady price growth. TWLO’s price grows at a lower rate over the last 12 months as compared to S&P 500 index constituents.

The Tickeron SMR rating for this company is 66, indicating slightly weaker than average sales and a marginally profitable business model. SMR (Sales, Margin, Return on Equity) rating is based on comparative analysis of weighted Sales, Income Margin and Return on Equity values compared against S&P 500 index constituents.

The Tickeron Profit vs. Risk Rating for this company is 100, indicating that the returns do not compensate for the risks. Twilio’s unstable profits reported over time resulted in significant drawdowns within these last five years. A stable profit reduces stock drawdown and volatility. The average Profit vs. Risk Rating for the industry is 78, placing this stock worse than average.

Another concern for Twilio is the extreme optimism from analysts. There are 23 analysts covering the stock and 20 of them rank the stock as a “buy” while the other three rate it as a “hold”. This puts the buy percentage at 87% and that is well above average compared to other stocks.

There is one indicator that hints at some signs of pessimism and that is the short interest ratio. The current reading is at 4.6 which is above average. It is also worth noting that the number of shares sold short increased from 15.85 million to 17.82 million in the second half of September and that indicates that pessimism is increasing among short sellers.