How to use Bollinger Bands in trading

Bollinger Bands were developed by famous trader John Bollinger as a technical analysis tool to discern the likely trading range of a security. A Bollinger Band is typically two standard deviations from a moving average line, both above and below the average.

Standard deviation is another word for the average volatility of a price over a length of time. It is typical for a trader looking up the historical price chart for a security to compare it to a moving average line. 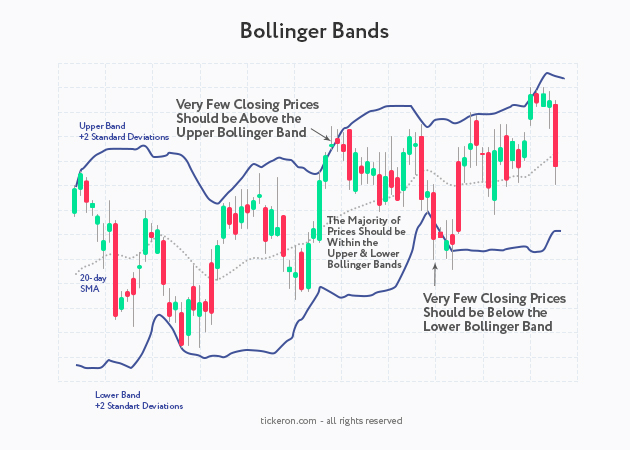 Traders use technical indicators like Bollinger Bands to make predictions about future prices and verify how well a specific indicator works for a particular security, often by calculating the odds of success under similar market conditions. Envelopes and trading bands help traders put filters on their decisions to trade, by setting limits on how much movement triggers a decision.

Moving average envelopes and trading bands come in several forms and levels of complexity, but they all seek to take the emotion and noise out of trading by setting limits above and below a moving average to serve as the markers for trades or further consideration.

A moving average envelope often takes a moving average line for a security or index and duplicates it, moving one a certain percentage above and one a certain percentage below (the distance may depend on volatility levels); the price fluctuations in a security then might trigger a decision to sell when the price hits the upper band or buy when the price hits the lower band. If it crosses the bands it might be seen as a new trend.

A trader might look at the upper and lower Bollinger Bands surrounding that moving average line, which may indicate support and resistance levels in the current market. Moves in the current price that cross the upper or lower Bollinger Bands are used as triggering events for trades that take advantage of the fact that the price is likely to move back within the bands in the near future.

It can be useful to combine the Bollinger Bands of various time periods on the same security to search for indicators as well, but ultimately they are meant to be useful information to help construct a strategy, and not as de facto trade indicators unto themselves.

It is important to remember there is no single indicator that works well for all securities. Bollinger Bands are one of many ways to utilize technical analysis in trading. Traders can support their decision making with artificial intelligence tools to generate trade ideas, analyze signals to execute advantageous trades, or in other ways that support rational, effective trading decisions.

How Do I Structure My Bond Portfolio?

There are three major ways to structure a bond portfolio: a ladder strategy, a barbell strategy, and a bullet strategy

What is the Structure of a Corporation?

What is the Structure of a Corporation?

Each state has different stipulations concerning what defines a corporation, but there are some commonalities across...

What are Medicare Benefits?

What are Medicare Benefits?

Medicare is a medical insurance benefit for Americans 65 years of age or older, but it also provides coverage for...

What is Second-To-Die Life Insurance?

What is Second-To-Die Life Insurance?

Second-to-die policies a.k.a. survivorship policies, are primarily used to provide a guaranteed legacy to their children

What are Net Tangible Assets?

What are Net Tangible Assets?

What is the Debt to Capital Ratio?

What is the Debt to Capital Ratio?

What is adaptive price zone?

What is adaptive price zone?

What is the Three Falling Peaks (Bearish) Pattern?

What is the Three Falling Peaks (Bearish) Pattern?