Copper and Copper Stocks May Be Getting Ahead of Themselves

Industrial metals have been on one heck of a roller coaster ride this year. First the metals saw tremendous declines when the global pandemic hit in the first quarter, but then they rallied sharply over the last eight months. Every hint that the global economy is recovering has caused prices to rise.

In the beginning of the rally, it seemed like prices were rising due to a decline in supply as production was halted or cut tremendously. Once different countries started to reopen their economies, the price jumps were fueled by increasing demand. The combination of supply cuts and demand increases has caused copper prices to jump nearly 75% from the March low.

Unfortunately there are signs that the rally in copper and the industrial metal stocks may be set for a pullback. I looked at the Commitment of Traders reports for copper over the last five years and the large speculators just surpassed a level of optimism that has been a warning sign. The group is net long 67,162 contracts. There have only been four instances where the group has been net long over 60K contracts and I have marked those instances on the chart of copper below. 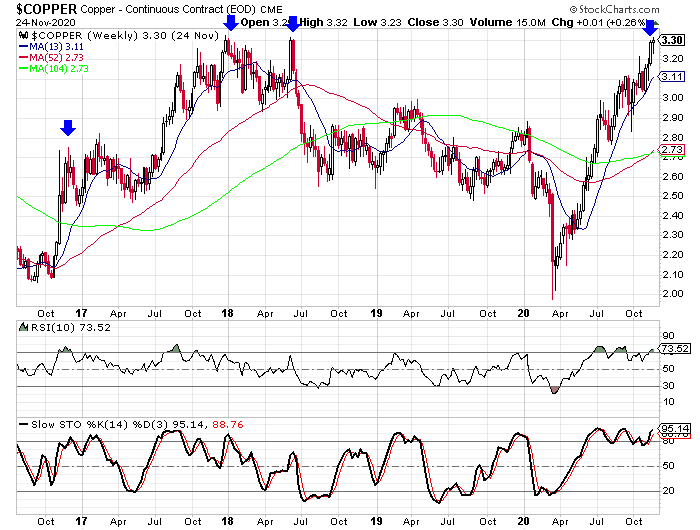 The charts for copper mining stocks look similar to the chart for copper itself, only the gains are better for some of them. Southern Copper (SCCO) has gained over 160% from its March low. BHP Group (BHP) and Rio Tinto (RIO) have both gained over 90% from their March lows.

My biggest concern is the sentiment and how rapidly the stocks have jumped. I am worried that the economic indicators are starting to show that the fourth quarter is going to show a slow down. The rally in copper and the copper stocks is based on economic growth and an increasing demand for the metal. If the global economy slows, that demand isn’t going to be nearly as high.

The Tickeron comparison shows how these stocks stack up against one another and how they measure up compared to other companies from other industries.