American Tower in upward trend ahead of earnings

Cellular tower REIT American Tower (NYSE: AMT) has been in a strong upward trend over the past year with the trajectory of the rally becoming steeper in 2019. Now the company is set to release third quarter earnings results on October 31 and investors are hoping the rally can continue.

Analysts expect American Tower to report earnings of $0.95 per share on the quarter with revenue coming in at $1.87 billion. In the third quarter of 2018, the company earned $0.83 on revenue of $1.79 billion. This reflects earnings growth expectations of 14.5% and expected revenue growth of 4.9%. Over the last three years the company has seen earnings grow by 21% per year while revenue has grown by 13%. In the second quarter the company saw EPS grow by 7% and revenue grew by 6%. The return on equity for American Tower is 21.4% and the profit margin is 15.5%.

When we add all of this fundamental data up, we get different ratings for how the company is doing compared to other companies. In American Tower’s case, they are doing well in most fundamental categories.

The PE Growth Rating for AMT is 32, pointing to outstanding earnings growth. The PE Growth rating is based on a comparative analysis of stock PE ratio increase over the last 12 months compared against S&P 500 index constituents. A rating of 1 indicates highest PE growth while a rating of 100 indicates lowest PE growth.

The Tickeron SMR rating for this company is 37, indicating strong sales and a profitable business model. SMR (Sales, Margin, Return on Equity) rating is based on comparative analysis of weighted Sales, Income Margin and Return on Equity values compared against S&P 500 index constituents.

Looking at the weekly chart for American Tower we see that the stock has been trading above its 13-week moving average since last October. That is an impressive run, especially considering the volatility we have seen in the overall market for the past year. 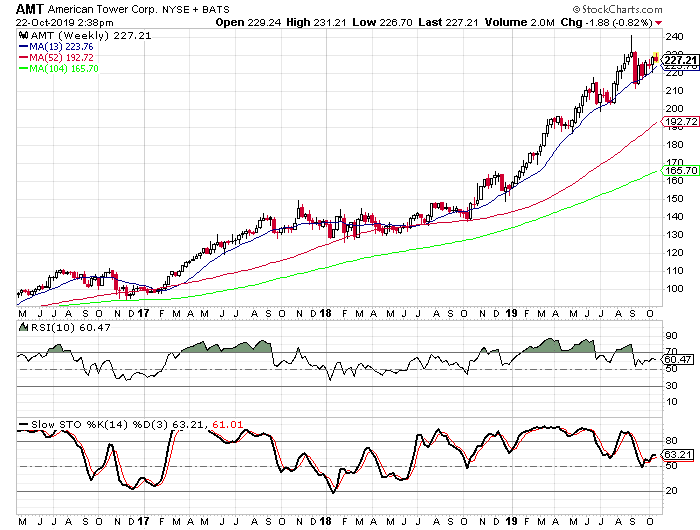 The overbought/oversold indicators are in the upper half of their range, but neither is in overbought territory. We see that the weekly stochastic readings haven’t been below the 50 level since June 2018. The 10-week RSI hasn’t been below the 5o level since October of last year. Neither of the indicators has been in oversold territory in the last three and a half years.

Despite the incredible performance from the company and the stock, analysts are more bearish toward the stock than the average stock. There are 18 analysts covering the stock and only six rank the stock as a “buy”. There are 11 “hold” ratings and one “sell” rating. This puts the buy percentage at 33% and that is well below the average range of 65% to 75%.

The short interest for American Tower is at 2.3 currently. This reading is a little below average and reflects a slight bullish skew from short sellers.

Given the overall picture for American Tower, there is very little to suggest that the rally will end once the earnings are released next week.