Bearish engulfing pattern on Immunomedics could be a bad sign

Analyzing biotech companies is trickier than it is with other sectors. Many firms in the sector will lose money for years until a breakthrough happens and then, BAM they are profitable. Until that breakthrough happens, you are left to analyze the technical aspects of the stock and monitor the news from the company. One such company is Immunomedics (Nasdaq: IMMU), a clinical-stage biopharmaceutical company.

The company has lost money in each of the last three years and the losses have been increasing rather than decreasing. Even with such results, the stock hasn't been tanking. In fact the stock moved up quite nicely in 2017 and halfway through 2018. For 2019 the stock seems to a bit range bound between the $12 mark and the $20 mark. I know that is a rather large range, but the stock jumped from $4 to $16 in 2017.

What got my attention about Immunomedics currently was the pattern in the candlestick chart on November 6. The stock opened at $17.88 and closed at $17.18 which created a red bar on the chart. What makes it a bearish engulfing pattern is the fact that the open was higher than the previous day's high and the close was lower than the previous day's low—the body of November 6 engulfs the body for November 5. 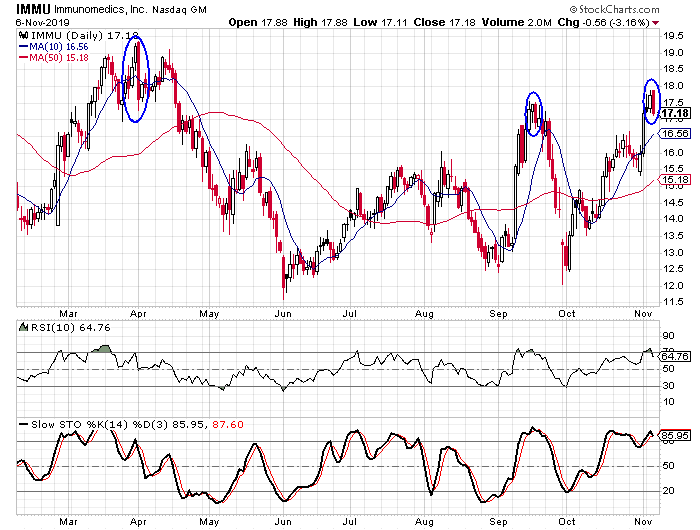 In candlestick charting, this is known as a topping pattern. I circled two other bearish engulfing patterns from Immunomedics past and they both came at temporary high points for the stock. The one in September is particularly strong as the stock fell immediately from the $17.50 level to the $12.50 level in only two weeks.

In addition to the bearish engulfing pattern, the higher Bollinger Band was broken on November 4 and could indicate that the price could fall as the ticker heads toward the middle band. In 46 of 54 cases where Immunomedic's price broke its higher Bollinger Band, its price dropped further during the following month. The odds of a continued downtrend are 85%.

The Tickeron SMR rating for this company is 98, indicating weak sales and an unprofitable business model. SMR (Sales, Margin, Return on Equity) rating is based on comparative analysis of weighted Sales, Income Margin and Return on Equity values compared against S&P 500 index constituents.

Immunomedics released earnings on October 30. The loss per share was $0.49 and that was worse than expected by analysts and it was worse than the $0.35 loss a year ago. Especially troubling was the fact that the company didn't generate any revenues in the third quarter of 2019. That is a scary statement right there.