The oil and gas exploration and production sector have lagged the overall market over the past year. The SPDR Oil & Gas Exploration and Production ETF (NYSE: XOP) is down just over 40% in the past year while the S&P 500 is up 3.55%. However, over the last two weeks, the sector has rallied sharply and the XOP is up 14.9% while the S&P is up 3.84%. The relative strength for the sector has been strong, but that strength has put many stocks in the sector in overbought territory.

One such stock is PBF Energy (NYSE: PBF). PBF has rallied over 20% in the last few weeks and the daily stochastic readings are in overbought territory. The indicators did, however, make a bearish crossover on September 10. 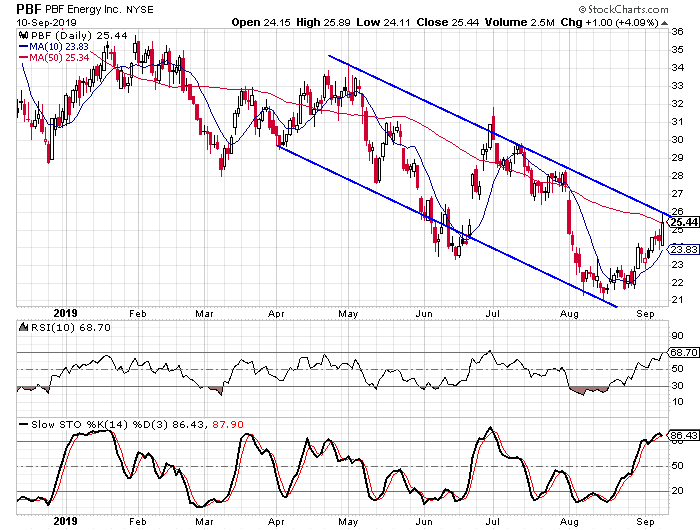 The 10-day RSI is close to overbought territory at 68.70 and that is the highest reading for the indicator since the end of June. What we see on the chart is that the stock peaked on June 30, right as the RSI and stochastic readings were both in overbought territory. From that day through mid-August, the stock fell over 30%. Could the stock be setting up for a repeat downturn?

It is also worth noting that the stock has been below its 50-day moving average for over a month now. The stock did move above the moving average on September 10, but it pulled back at the end of the day and closed just above the trend line.

In addition to the bearish crossover from the stochastic readings and the overbought level on the RSI, the higher Bollinger Band was broken on September 5 and the stock has remained above the upper band. According to the Tickeron Technical Analysis Overview, a price fall is expected as the ticker heads toward the middle band. In 27 of 43 cases where PBF's price broke its higher Bollinger Band, its price dropped further during the following month. The odds of a continued downtrend are 63%.

The Tickeron Profit vs. Risk Rating for this company is 93, indicating that the returns do not compensate for the risks. PBF’s unstable profits reported over time resulted in significant drawdowns within the last five years. A stable profit reduces stock drawdown and volatility. The average Profit vs. Risk Rating for the industry is 87, placing this stock worse than average.

The Tickeron SMR rating for this company is 97, indicating weak sales and an unprofitable business model. SMR (Sales, Margin, Return on Equity) rating is based on comparative analysis of weighted Sales, Income Margin and Return on Equity values compared against S&P 500 index constituents.

Digging deeper in to the stats that make up the SMR rating, PBF saw earnings decline by 40% in the most recent quarter as sales were down 12%. The return on equity for the company is 15.5% and that is average. However, the profit margin is only 2.0% and that is well below average.

In addition to the downward trend from the technical side and poor fundamentals, the Tickeron Trend Prediction Engine generated a bearish signal for PBF on September 9. The signal showed a confidence level of 72% and it calls for a decline of at least 4% within the next month. Past predictions on PBF have been successful 88% of the time.