John Jacques
published in Blogs
Bitcoin Surged in April – Will the Rally Continue?

Bitcoin Surged in April – Will the Rally Continue?

Is the Bitcoin bear market over?

When Bitcoin reached a high of $19,343 on December 16, 2017, investors were of the mind that sky was the limit. What happened next was the biggest reality check the cryptocurrency has ever seen. From mid-December through essentially late-March, Bitcoin’s price plummeted some 65%, and with the benefit of hindsight, one could argue that it displayed traits commonly found in equity bear markets: a steep, scary drop, followed by a dead cat bounce (February), followed by another down leg. Bear markets often deplete investors’ hopes in cruel ways, and for many, Bitcoin’s bear did just that.

But maybe the dark times are over. One could argue that since late March, Bitcoin’s price has found a support level, moving in a sideways trading range of about $6,600 to $7,000. But something interesting happened on April 11, when the price of Bitcoin broke out to the upside and has continued to make strides higher to date. The question is, is Bitcoin officially in recovery mode, meaning that the rally could continue??

Some technical traders and analysts are now keeping an eye on the 50-day moving average of about $8,600, labeling that price as a key support. The 150-day moving average is higher, at about $9,700, which could also define when Bitcoin could earnestly charge through those levels if it continues to breakout. Tickeron’s AI sees something else.

Tickeron’s AI confirmed a “Wedge Falling” Bullish pattern for Bitcoin (BTC.X) in mid-April and thinks with greater than 25% confidence that the price of Bitcoin could surge to around $11,500 if the pattern plays out. For investors, that could mark an almost +20% surge from the current level of ~$9,600. On the chart below, you can see the AI’s thinking and details about the pattern formation: 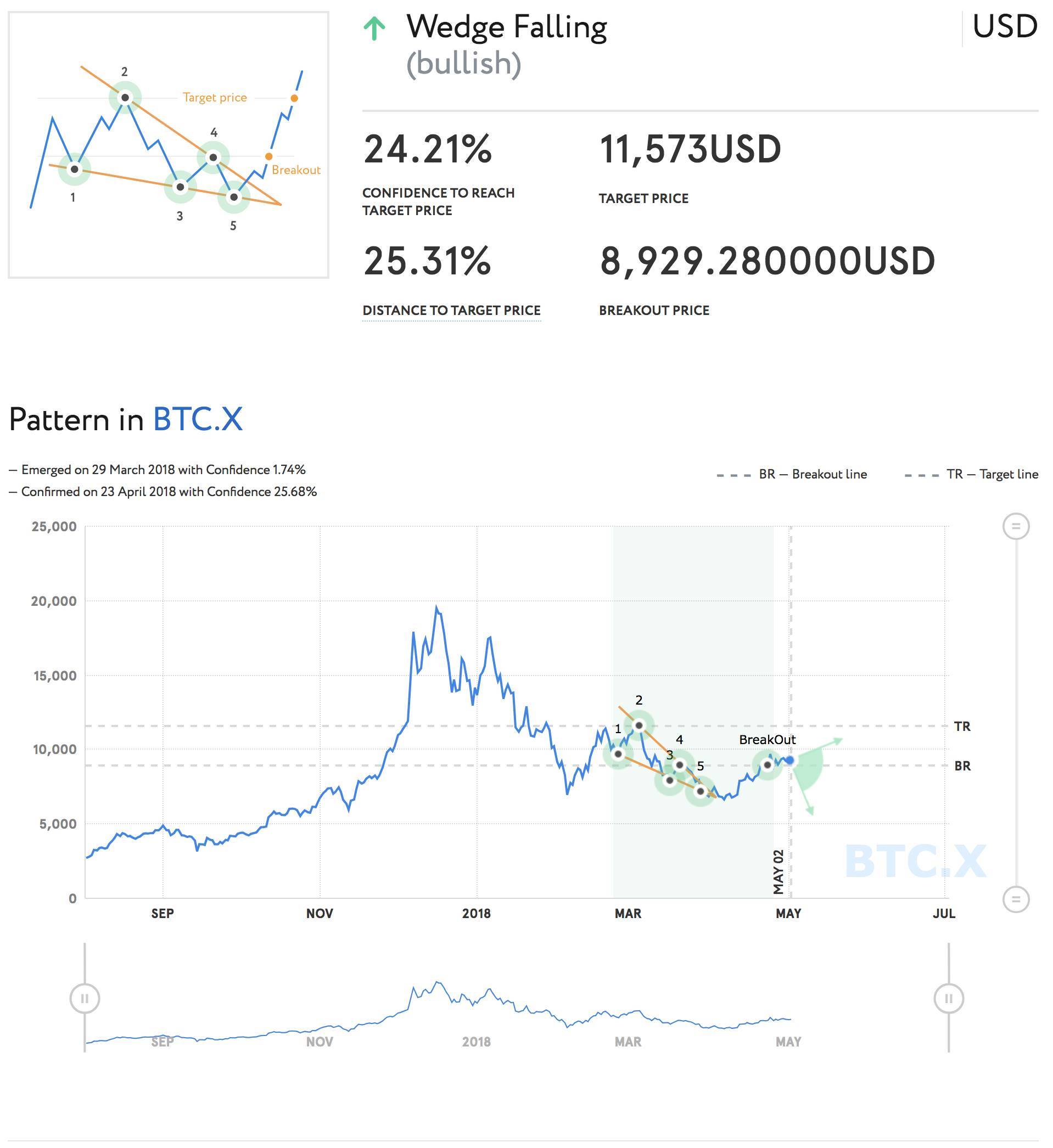 Ready to Try and Capitalize? How to Trade a “Wedge Falling” (Bullish) Pattern

Tickeron’s AI can deliver you technical pattern formations, trade ideas, breakout prices, and target prices. You let the algorithms do all the work, and then pick the trades that make the most sense for you. It’s that easy. Learn more now and start a FREE 45-day trial: Artificial Intelligence for Trades in Stocks, Cryptocurrencies, ETFs, and more.

For a “Wedge Falling” (Bullish) pattern, a trader should consider going long the cryptocurrency at the breakout price, or perhaps purchase a call option in anticipation that the security’s price will rise. Once the target price is reached, either sell the security or check Tickeron’s AI to see if a new pattern has formed.

Trading cryptocurrencies is a new art, a new science. Tickeron has developed Artificial Intelligence to help you navigate the complex trading world. Find out how you can use algorithms to find patterns in the securities markets today, so you can trade with data – not emotions. Get started on tickeron.com.