The iShares MSCI ACWI ETF (Nasdaq: ACWI) bounced off of an upwardly sloped trend line this past week and has since turned higher. If the ETF continues to rally, it could be setting up a showdown at the $75 area.

First, the ACWI stands for All Country World Index. The ETF follows the index with equity investments in both developed and emerging market equities and in large-cap and mid-cap companies. To give you an idea of what types of holdings are in the ETF, the following table shows the top 10 holdings in terms of percentage of assets. 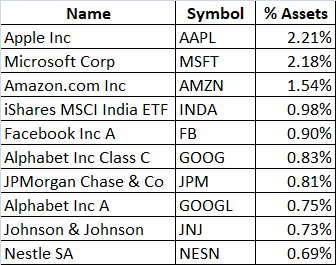 While the list is dominated by big name American companies like Apple, Microsoft, and Amazon, we also see an ETF that represents India’s overall market as well as Nestle.

Now that you have an idea of what the ETF’s holdings are made up of, let’s take a look at the chart. 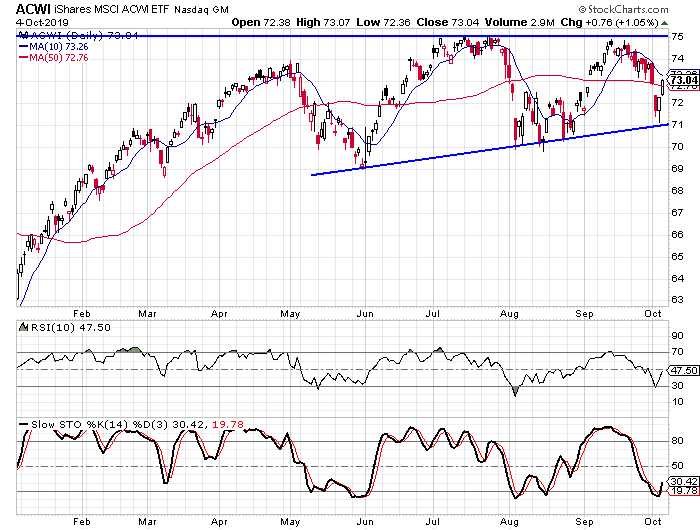 If we connect the lows from May and August, we get an upwardly sloped trend line and the fund came within a hair of that trend line this past week.

The overbought/oversold indicators hit oversold territory and then bounced at the end of the week. This certainly suggests that the fund is ready to rally again, but the $75 area is still looming as potential resistance once again. And we have to keep in mind that the third quarter earnings season will start next week.

There is also this from Tickeron—the stochastic indicator suggests the ticker price trend may be in a reversal from a downtrend to an uptrend. In 43 of 51 cases where ACWI's stochastic indicator exited the oversold zone, it resulted in an increase in price. Tickeron's analysis proposes that the odds of a continued uptrend are 84%.

In order to get an idea of how the top holdings in the ACWI rank with their fundamentals, I ran the eight U.S. stocks on the list through Invest0r’s Business Daily scans—excluding Nestle and the India ETF. The average EPS rating for the other eight was 79.5 and that indicates pretty strong earnings growth for the group as a whole. All but one of the eight stocks got an A rating in the SMR category with the lone exception being Facebook which has a B rating.

Given this information, the ACWI’s top holdings certainly appear to have strong fundamentals at this time. That could bode well for the fund as we enter the next phase of earnings’ releases. Don’t be surprised if the fund breaks through the $75 level.