Brazil ETF could be entering a buy zone

The Brazilian market has lagged other major American markets over the last month and it has underperformed the overall emerging market index. The selling that has hit Brazilian stocks could be providing a buying opportunity for the iShares MSCI Brazil Capped ETF (NYSE: EWZ).

The ETF has been trending higher since last September and a trend channel has formed that defines the different cycles within the overall trend. The upper rail connects the high from last October with the highs from January and July of this year. The lows from last September and this past May connect in a parallel lower rail. 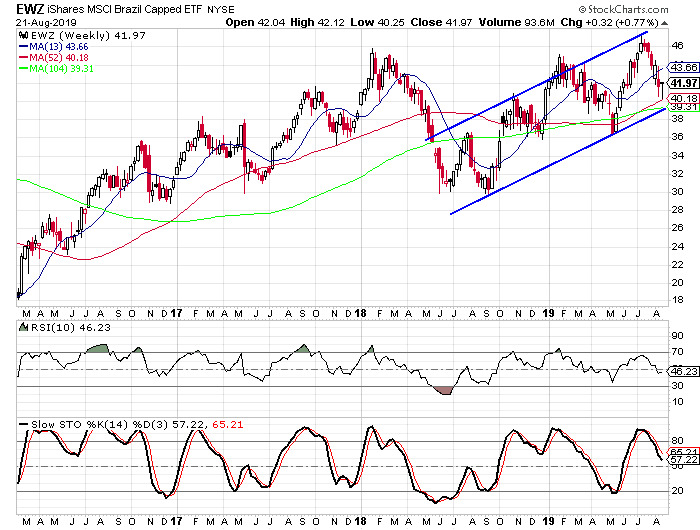 The EWZ has pulled back over the last six weeks and got down close to the lower rail, but appears to have found support at its 52-week moving average. The fund briefly dipped below the 52-week in May, but quickly rallied back with a gain of over 30% in only eight weeks. The lower rail is slightly below the 52-week and it is in close proximity to the 104-week moving average.

The weekly overbought/oversold indicators were in or close to overbought territory in early July, but the pullback over the last six weeks has brought them back down toward the middle of the range.

Looking at the daily chart, we see that the EWZ has been hovering right around the lower Bollinger Band over the last eight trading days. The fund briefly dropped below the lower band on several occasions. The indicators looked similar back in May just before the huge rally. According to the Tickeron Technical Analysis overview, in 35 of 45 cases where EWZ's price broke its lower Bollinger Band, its price rose further in the following month. The odds of a continued uptrend are 78%. 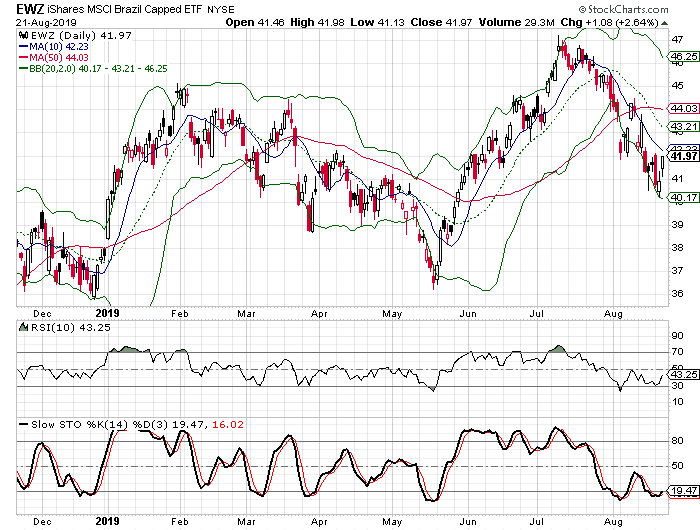 The daily stochastic readings have been in oversold territory quite a bit during the month of August and they just made a bullish crossover on August 21. This could also be a positive sign for the fund.

Another potential positive sign for the EWZ is the fact that Tickeron’s Trend Prediction Engine generated a bullish signal for the fund on August 19. The signal showed a confidence level of 70% and it calls for a gain of at least 4% over the next month. Past predictions on the EWZ have been successful 94% of the time. 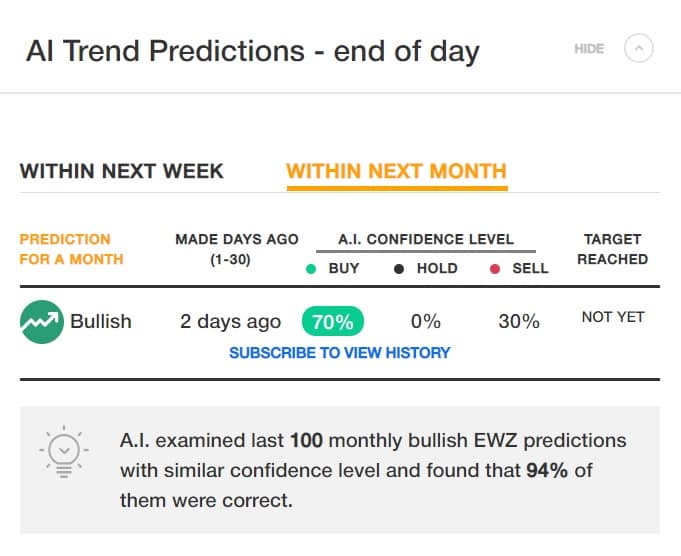 From a fundamental perspective, we don’t have the traditional indicators to look at like we do with a stock. However, looking at the Brazilian economy as a whole, the economy has been struggling in recent years and that led to the election of pro-business President Bolsonaro back in February. There have been some grumblings that things are changing fast enough, but the new administration has only been in place for six months and during the last six months we have seen a lot of turmoil in the global markets and in trade.

Brazil could be a major benefactor in the trade war between the United States and China. Two of the biggest exports for Brazil are soybeans and iron ore. Grains and steel have been at the center of the trade war, and that includes the ones with Canada and Mexico as well.