The stock has been trending higher since December and is up over 50% since then. Strong earnings growth has helped the stock move higher. Masco has seen earnings grow by 24% per year over the last three years and they were up by 16% in the most recent quarterly report.

The company’s return on equity is a little questionable with both the Wall Street Journal and Investor’s Business Daily not showing an ROE while Yahoo Finance shows one that is ridiculous at 789%. Excluding that indicator, the return on assets is at 13.95%, the profit margin is 13.1%, and the operating margin is 15.04%

The Tickeron SMR rating for Masco is 1 and that indicates very strong sales and a profitable business model. SMR (Sales, Margin, Return on Equity) rating is based on comparative analysis of weighted Sales, Income Margin and Return on Equity values compared against S&P 500 index constituents.

The Tickeron Valuation Rating of 2 indicates that Masco is seriously undervalued in the industry. A rating of 1 points to the most undervalued stocks, while a rating of 100 points to the most overvalued stocks. This rating compares market capitalization estimated by our proprietary formula with the current market capitalization. Masco is currently trading at a P/E ratio of 16.74 and that is well below the average stock in the industry.

Looking at the chart for Masco we see how the stock has rallied off the December low. You can also see how a trend channel has formed over the last four months with the lower rail connecting the lows from June and August while the upper rail connects the highs from July and September. The gap higher in July did push the stock through the upper rail for a day, but then the stock slipped back. 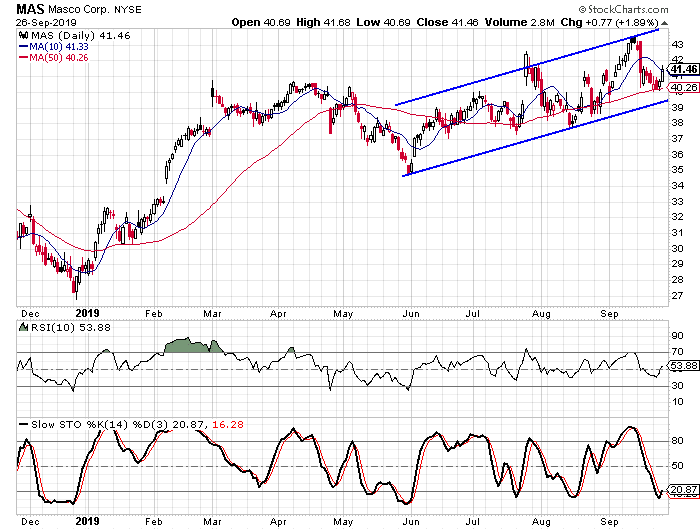 One of the more encouraging signs for Masco for me was the bullish crossover from the daily stochastic readings on September 26. In each of the last three instances where the indicators have been in oversold territory and made a bullish crossover the stock has rallied over 14% within the next month or two.

We also see that the stock crossed above its 50-day moving average toward the end of August and appears to be using the trend line as support at this time.

Masco is set to announce earnings again on October 30. The report will be worth keeping an eye on as it was earnings that created the big gap higher in July and the big gap lower in April.