The oil & gas exploration sector went through a rough patch from November 5 through November 19 with the SPDR S&P Oil & Gas Exploration & Production ETF (NYSE: XOP) falling over 10% during that stretch. Cabot Oil & Gas (NYSE: COG) fell with the sector and continued to fall for a few more days. From November 5 through November 21, Cabot dropped 11.4%. This brought the stock down to the $16 level and that area could act as support since that is where the stock bottomed in August. 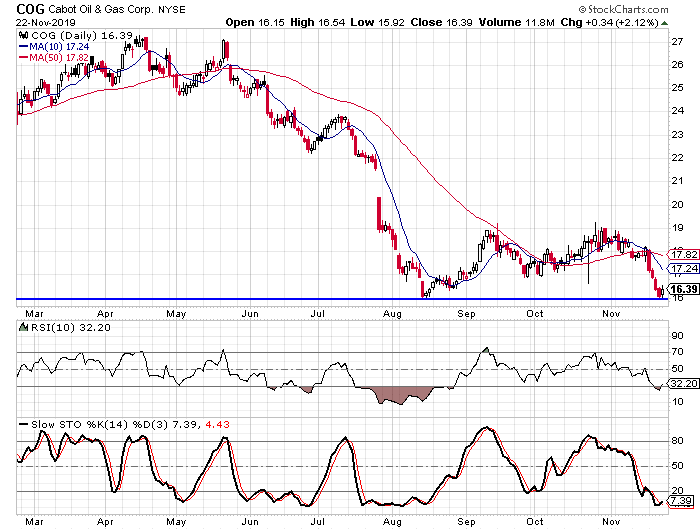 The decline caused the 10-day RSI to reach oversold territory and the daily stochastic readings hit oversold territory as well. Cabot also dropped below its lower Bollinger Band on November 18. According to the Tickeron Technical Analysis Overview, in 28 of 38 cases where Cabot broke below its lower Bollinger Band, the stock rose in the following month.

While the technical picture shows a pretty strong line of support and a number of possible positive catalysts from the overbought/oversold indicators, Cabot's fundamentals are a bit of a mixed bag at this time. The company has been able to grow earnings at a rate of 185% per year over the last three years, but they only grew by 16% in the third quarter.

Sales have increased at a rate of 28% per year over the last three years, but they actually fell by 21% in the third quarter.

The management efficiency measurements are pretty strong with a return on equity of 23% and a profit margin of 30.4%. The Tickeron SMR rating is above average with a rating of 39, but that is the only fundamental rating that is above average.

The Tickeron PE Growth Rating for Cabot is 97, pointing to worse than average earnings growth. The PE Growth rating is based on a comparative analysis of stock PE ratio increase over the last 12 months compared against S&P 500 index constituents. A rating of 1 indicates highest PE growth while a rating of 100 indicates lowest PE growth.

The Price Growth Rating is a 97, and that indicates worse than average price growth.

The worst rating of them all is Profit vs. Risk Rating which is at 100, the worst possible rating. It indicates that the returns do not compensate for the risks. Cabot's unstable profits reported over time resulted in significant drawdowns within these last five years. A stable profit reduces stock drawdown and volatility. The average Profit vs. Risk Rating for the industry is 94, placing this stock worse than average.

Normally when I see mixed readings for a stock, I will rely on the sentiment to help me decide which way I think the stock will go. Unfortunately with Cabot, the sentiment indicators are giving us much. There are 29 analysts covering the stock with 17 "buy" ratings, 10 "hold" ratings, and two "sell" ratings. This puts the buy percentage at 58.6% which is slightly below average, but not to an extreme.

Like the analysts' ratings, the short interest ratio is slightly more bearish than the average stock with a reading of 3.7, but it isn't what I would call an extremely bearish reading.