Over the last few weeks there have been several Chinese internet firms that have reported strong earnings for the second quarter. Companies like Alibaba, Baozun and JD.com have all turned in strong quarterly results, but the stocks haven’t been able to break out even after the earnings reports. This reflects the overall downward trend for the stocks in the industry.

The KraneShares CSI China Internet ETF (AMEX: KWEB) reflects how the industry has been moving lower. We see on the daily chart that the high from May connects with the high from July to form a downward sloped trend line. The stock hit the trend line again this past week before turning lower. 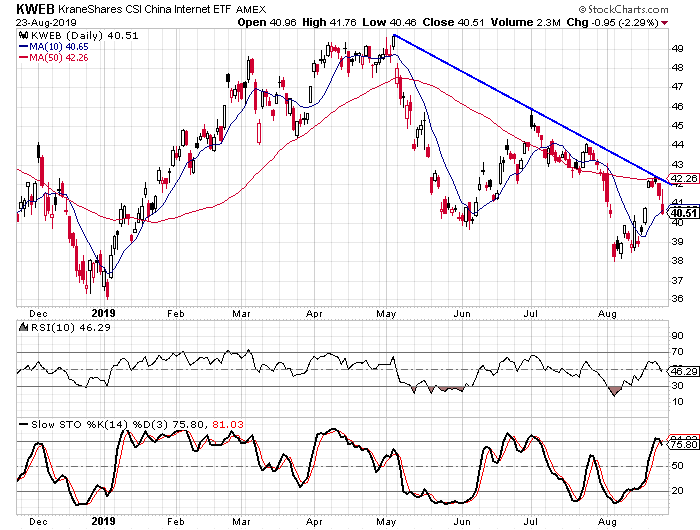 You can also see how the 50-day moving average is right in the same area as the trend line and that could act as a secondary layer of resistance going forward.

The daily stochastic readings had hit overbought territory after rallying from the low earlier this month. The indicators turned lower on August 23 and they made a bearish crossover as a result.

In addition to the bearish crossover from the daily stochastic readings, the Tickeron Trend Prediction Engine generated a bearish signal on the fund on August 23. The signal showed a confidence level of 64% and it calls for a decline of at least 4% within the next month. Past predictions on KWEB have been successful 86% of the time. 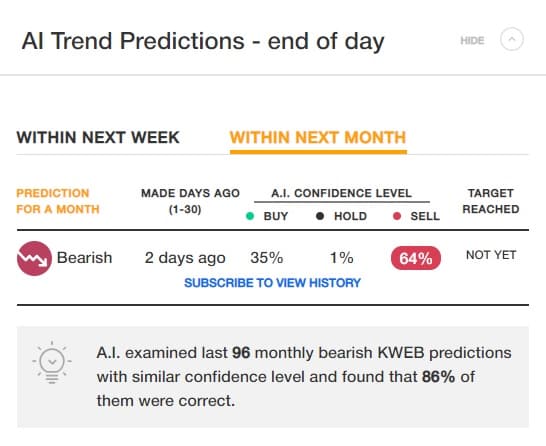 Looking at the Tickeron Technical Analysis Overview, there are a couple of other indicators that are pointing to a downward move for KWEB. The price moved below its 50-day Moving Average, which indicates a reversal from an Uptrend to a Downtrend. In 21 of 25 cases where KWEB's price crossed below its 50-day Moving Average, its price fell further within the subsequent month. The odds of a continued Downtrend are 84%.

From a fundamental perspective, there are several factors at work that are hurting Chinese internet stocks. The ongoing trade war with the United States is certainly taking a toll and with China introducing new tariffs on U.S. goods on August 23, it doesn’t look like we are anywhere close to an agreement. Secondly, the ongoing unrest in Hong Kong is weighing on the minds of investors. The protests have been going on for several months and they are presenting issues with the current two-system structure that is in place. The biggest concern here is that it has hurt the Chinese Yuan and the exchange rate is the lowest it has been in decades. One last factor is the slowing Chinese economy. The GDP growth rate has been growing at a much slower pace in the last few years compared to what the growth rate was 10 to 15 years ago.

Looking at the EPS ratings for some of the top holdings in the KraneShares CSI China Internet ETF, I was able to pull up eight of the top 10 on Investor’s Business Daily. There were some strong ones from Alibaba and JD.com, but those were offset by low ones for companies like Pinduoduo, Baidu, and Tencent Music. The average EPS rating for the eight companies was just under 60.

I ran the same numbers for the top 10 holdings in the SPDR S&P Internet ETF (XWEB) and the average EPS rating was 74.