CrowdStrike Holdings (Nasdaq: CRWD) is an infrastructure software company that offers security solutions at different levels through its Falcon platform. CrowdStrike went public back on June 12 and the stock has been all over the board since it debuted. It jumped from around $60 to over $100 in August, only to fall back below the $50 level in the past few months.

Because the company is losing money, there isn't a calculable return on equity and the profit margin is -53.8%.

CrowdStrike has performed well in terms of its sales growth with sales growing by an average of 114% per year over the last three years and they jumped by 94% in the third quarter.

The sales growth is one of the few positive fundamental indicators for the company at this time. There are a number of indicators from Tickeron that are well below average. For instance, the Tickeron Valuation Rating of 82 indicates that the company is overvalued in the industry. A rating of 1 points to the most undervalued stocks, while a rating of 100 points to the most overvalued stocks.

The Tickeron Profit vs. Risk Rating for CrowdStrike is 100 and that is the worst rating a company can get. It indicates that the returns do not compensate for the risks. The company's unstable profits reported over time resulted in significant drawdowns within the last five years. A stable profit reduces stock drawdown and volatility. The average Profit vs. Risk Rating for the industry is 77, placing this stock worse than average.

Looking at the chart we see how the stock jumped after its debut, but peaked near $100 in August. Since then the stock dropped in half and recently rebounded back to its IPO price. 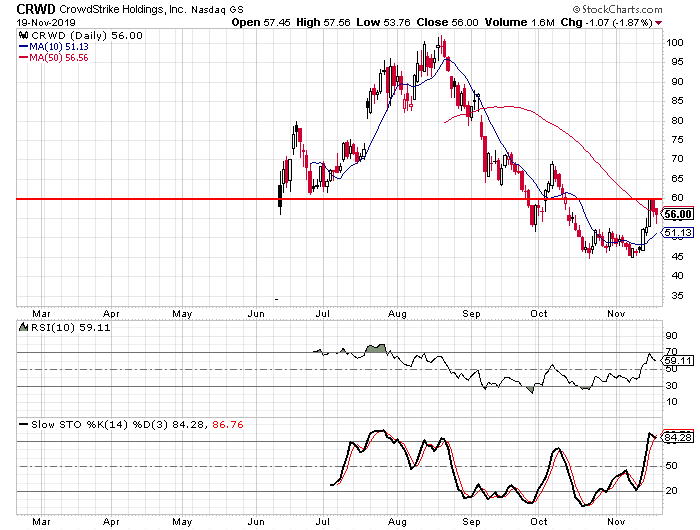 A rally over the last week or so saw the stock jump from the $45 area back up to the $60 area which is where the stock debuted back in June. This could be an area of resistance just based on that fact.

The recent rally caused the overbought/oversold indicators to jump to overbought territory. The daily stochastic readings made a bearish crossover on November 19 and that could be a bad sign for the stock.

Looking at the sentiment toward CrowdStrike, it is relatively neutral. There are 20 analysts covering the stock with 12 "buy" ratings, seven "hold" ratings, and one "sell" rating. That puts the buy percentage at 60% which is slightly below average. The short interest ratio is at 3.1 which is right at average.