Recently I have written several articles about energy stocks and all of them have been bearish in nature. The stocks have been trending lower and there are a number of them that have poor fundamentals. Tonight, the Energy Select Sector SPDR (NYSE: XLE) caught my attention, or at least the chart did.

The XLE was on a bearish scan that I run each night and as I scrolled through the charts, I couldn’t help but notice how the highs from April, July, and the last two days all connected very nicely with a downward sloped trend line. I also took it upon myself to draw a parallel line to see if the lows connected to form a trend channel. They do to some degree, but the lower rail isn’t nearly as clean as the upper rail. 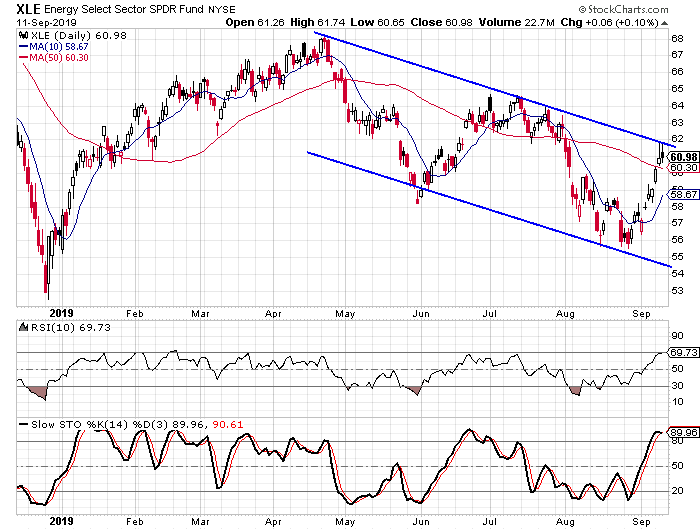 We see that the overbought/oversold indicators are both at overbought levels and the stochastic readings just made a bearish crossover on September 11.

In addition to the bearish crossover from the stochastic readings, the Tickeron Technical Analysis Overview shows that the higher Bollinger Band was broken. A price fall is expected as the ticker heads toward the middle band, and that invites the trader to consider shorting the XLE, or exploring put options. In 25 of 29 cases where XLE's price broke its higher Bollinger Band, its price dropped further during the following month. The odds of a continued Downtrend are 86%.

The Tickeron Trend Prediction Engine generated a bearish signal on the XLE on September 9. The signal showed a confidence level of 62% and it calls for a decline of at least 4% within the next month. Past predictions on the ETF have been successful 85% of the time. 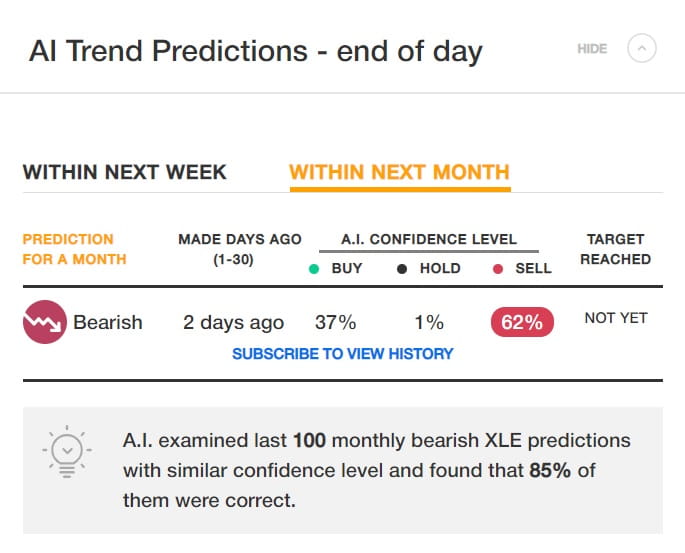 One of the reasons the energy stocks keep catching my eye is because of the poor fundamentals. When I run my scans each night, there is a bullish list and a bearish list and those scans are based on technical factors. After I get these lists, I run another scan on Investor’s Business Daily to get fundamental ratings using the EPS rating and the SMR ratings as a basic overview of a how a stock is doing fundamentally. I also check Tickeron’s technical analysis and fundamental analysis overviews.

When I saw the XLE on the bearish list, I ran a scan for the top 10 holdings in the ETF to get the EPS rating and the SMR rating from IBD. I put together the following table from that scan. 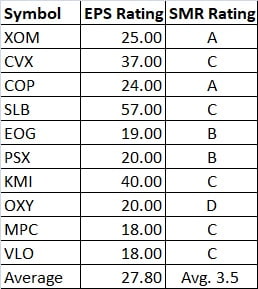 The average EPS rating of the top 10 holdings in the XLE is 27.8 and that shows poor earnings growth for the sector as a whole. I assigned a number to the SMR rating—5 for an A, 4 for a B, 3 for a C, etc. The average SMR rating is a C+ or 3.5. This shows slightly better than average sales growth, profit margins, and ROEs for this group.

Overall, the fundamental picture for the energy sector isn’t very good based on these findings.

There are also some that believe the sanctions on Iran will be eased after the firing/resignation of National Security Adviser John Bolton. If the sanctions are eased, there will be more oil on the market or an increase in supply. Oil dropped 2.5% on September 11.