Group of 5 Homebuilders to Report Earnings Next Week

There has been an incredible shift in consumer preferences, when it comes to living arrangements, since the health crisis hit the United States. It seems that people are looking to buy single-family homes in the suburbs en masse at this point in time. The COVID-19 pandemic is creating demand as consumers are perhaps reevaluating whether they want to live in a building with hundreds of other people.

We are also seeing companies shift their policies to allow more people to work remotely. Earlier this week Microsoft announced that it was permanently changing its policy and that many workers would be allowed to work remotely.

The shift in housing preferences has caused the homebuilding stocks to rally sharply in the last six months or so. The SPDR S&P Homebuilders ETF (XHB) has more than doubled off of its March low. The huge rally has put the fund in overbought territory and many of the stocks held by the fund are also overbought at this time. 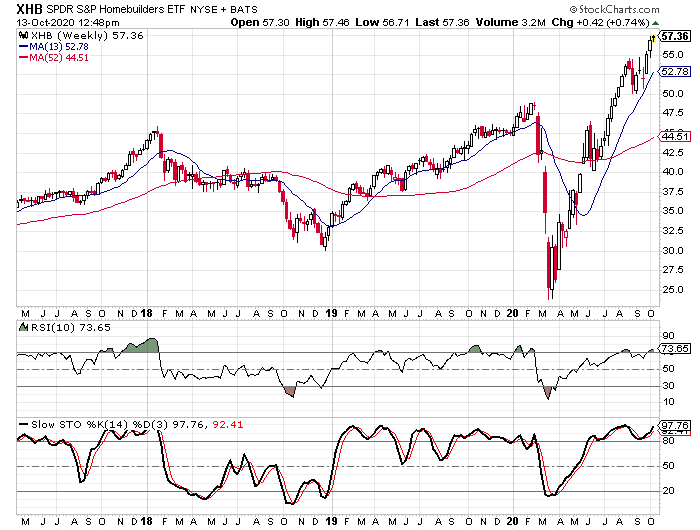 In the week of October 19-23, five different homebuilders are expected to report earnings. Rather than using just the holdings in the SPDR Homebuiders ETF, I looked to Tickeron’s Homebuilding Industry Screener. By using this feature I was able to quickly review the fundamental and technical indicators for all five of these stocks. The companies reporting next week are Meritage Homes (MTH), M/I Homes (MHO, Patrick Industries (PATK), PulteGroup (PHM), and TRI Pointe Group (TPH). 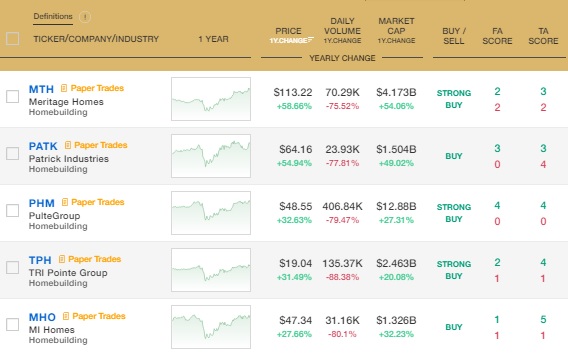 As for specific indicators where there is consensus among the group, all five have positive Outlook Ratings on the fundamental side. As for the technical indicators, there are two where all five have bullish signals—the Momentum Indicator and the MACD indicators. 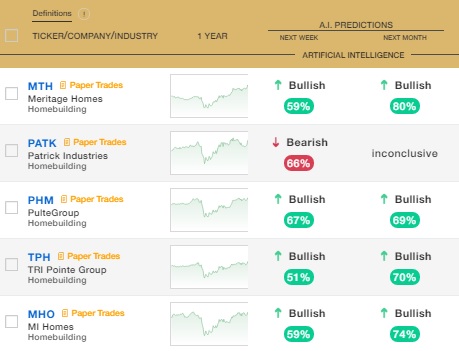 One other area of analysis that I find useful, especially when it comes to earnings announcements, is the sentiment being displayed toward a stock before the report. If the sentiment is overly bullish, it is almost impossible for the company to issue earnings that meet expectations. Conversely, if the sentiment is extremely bearish, it is an indication that expectations are low and any positive news will be met with buying pressure. This is a contrarian line of thinking.

For these five stocks the sentiment doesn’t seem to be overly bullish in any capacity. In this case I listed the overall analysts’ ratings for each stock and I listed the short interest ratio (SIR) as well. In the case of the analyst ratings, I have grouped them as buy/hold/sell. There aren’t any sell ratings among the stocks.

The only stock that has a vast majority of buy ratings is Patrick Industries, but there are only six analysts covering the stock. I was very surprised by Pulte having more hold ratings than buy ratings. Over the years I have found the average buy percentage falls in the 65% to 75% range. This means Pulte is well below average in this area. Given the high number of hold ratings and the reluctance for analysts to issue sell ratings, having a great number of hold ratings gives us a greater chance of upgrades than downgrades.

As for the short interest ratios, the average ratio is in the 3.0 range. The reason a high short interest ratio can serve as a bullish indication is more mechanical than the analysts’ ratings. If a stock is rallying and a short seller is forced to cover their position, it adds buying pressure to a stock that is already rallying. In this case we see that Patrick Industries and TRI Pointe Group both have short interest ratios that are much higher than the average stock. If either of these companies beats its EPS estimate by a wide margin, the stock could rally sharply as short sellers try to cover.

The overall outlook for the group is pretty strong based on the fundamentals, the technical indicators, and the sentiment indicators. I would consider Pulte and TRI Pointe as the strongest two based on the overall analysis.