The pandemic has changed the housing industry considerably in the past year. Consumers have changed their preferred living arrangements and that has created an increase in the demand for single-family homes.

Because of the increase in demand for homes, the stocks of homebuilders have rallied sharply since last March. The SPDR S&P Homebuilders ETF (XHB) was below $25 at its low in March and it recently moved above the $60 level. That is a huge move for an ETF. With such a big move, many of the stocks have moved in to overbought territory and we see that the weekly stochastic indicators for the XHB are in overbought territory. The 10-week RSI is close to being overbought, but isn’t quite there. 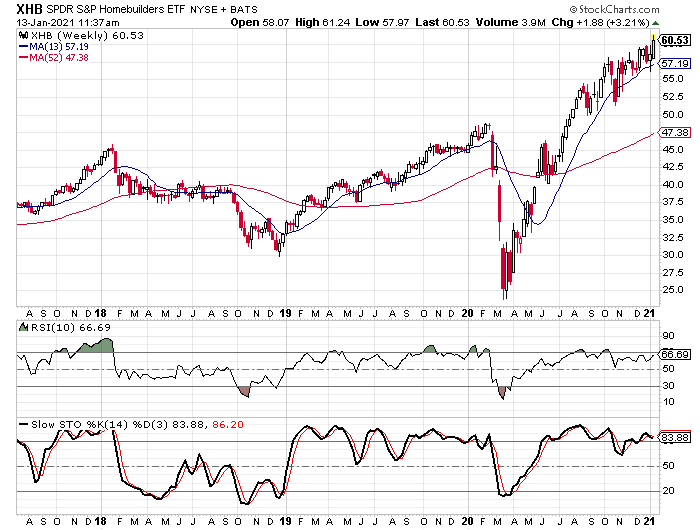 With so many homebuilders being overbought, I found it interesting that Tickeron’s AI Prediction Tool generated bearish signals on four different homebuilders on January 12. The predictions called for declines of at least 4% over the next month and all four had confidence levels over 80%.

The four stocks that received the bearish signals were D.R. Horton (DHI), LGI Homes (LGIH), Meritage Homes (MTH), and Toll Brothers (TOL). If we look at the fundamental screener from Tickeron, we see that three of the four stocks, all but LGI Homes, get poor scores in their Outlook Ratings. Three of the four also get poor ratings from their P/E Growth Rating with Toll Brothers being the only one that doesn’t get a bad score.

All four companies get neutral ratings in the SMR Ratings and the Price Growth Ratings. As you can see in the snapshot above, there are very few scores highlighted in green. D.R. Horton gets two, the Valuation Rating and the Profit vs. Risk Rating, and Toll Brothers and LGI Homes each get one positive rating.

These companies have benefitted from the change in consumer behavior, but it could be the bearish signals are suggesting that the stocks have rallied to the point that they have gotten ahead of the possible growth for the companies.

You can see a complete analysis and comparison for the companies from Tickeron’s artificial intelligence platform below.