Housing Industry Changing Due to Pandemic

Almost every industry has been affected by the COVID-19 virus in the last few months. The global pandemic has changed how entire industries conduct business and it has had both positive and negative impacts. Industries such as software have actually benefitted as demand for products that help people work remotely have jumped. Seeing that type of change isn’t really surprising.

One industry that seems to be benefitting, and it’s somewhat surprising, is the housing industry.

The housing industry includes manufacturers of single-family homes and multifamily homes. It also includes builders of condominiums and mobile homes. The industry experienced a terrible crisis from 2005 through 2011 as the global financial crisis hit.

The financial crisis had much of its origins in the U.S. real estate market and that hit the housing industry hard. The industry has been recovering since with New Home Sales trending higher since hitting a low in February 2011. 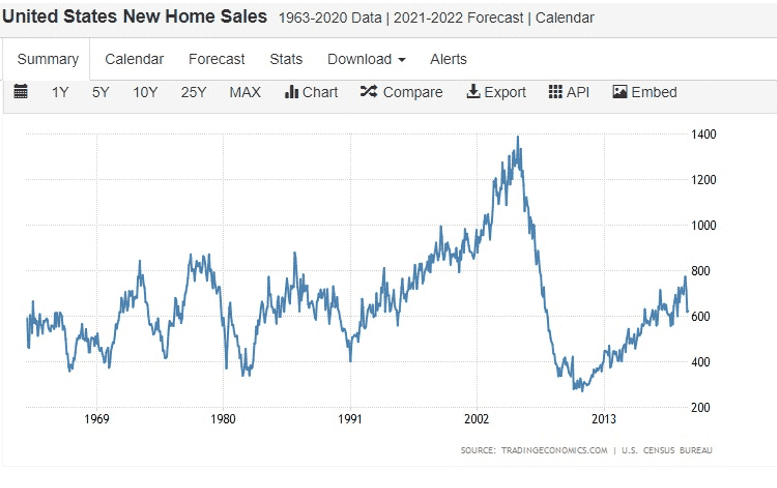 The annualized rate for new home sales bottomed at 270K in 2011 and it recently peaked in January at 774K. New home sales still aren’t anywhere near the all time high of 1.389 million reached in July 2oo5.

Economists were expecting a big decline in new homes sales in April, but instead the annualized rate increased from March to April. The consensus estimate was for an annualized rate of 485K and it actually came in at 623K. That was actually a small increase from the March reading of 619K.

I have two theories as to why new home sales are doing much better than economists thought. First, the current health crisis is causing many people to rethink their current lifestyle. Instead of wanting to live in the heart of heavily populated cities in high-rises with thousands of others, some people are choosing to move out to the suburbs.

My second theory is based on how so many people are working from home and spending far more time there with their entire family. This may be inspiring people to look for larger living quarters. There is also a trend for companies to make telecommuting a permanent policy. This allows people to move to more affordable areas and away from cities with high housing costs like San Francisco, New York, etc.

Of course another factor is the incredibly low mortgage rates. The housing industry is very dependent on low interest rates and rates hit historically low levels in March. The 10-year treasury yield is the foundation for most rate pricing at mortgage companies. The yield on the 10-year fell below 1.0% in February.

Turning our attention to some of the stocks in the industry, I am impressed with how some of the biggest homebuilders look in terms of their fundamentals. The following table is from Investor’s Business Daily and it shows how these five companies all have extremely good EPS ratings and all have above average SMR ratings.

The EPS ratings measure the company’s earnings growth over the last few years with an emphasis on the most recent quarters. The SMR rating measures the company’s sales growth, profit margin, and return on equity. On the EPS ratings’ scale, 99 is the best a company can get and on the SMR grading system, an A is the highest score.

Looking at Tickeron’s Trend Prediction Engine for June 12, all five of the companies in the table above received buy signals on June 11. This means all of the stocks are expected to move up at least 2% over the next week. 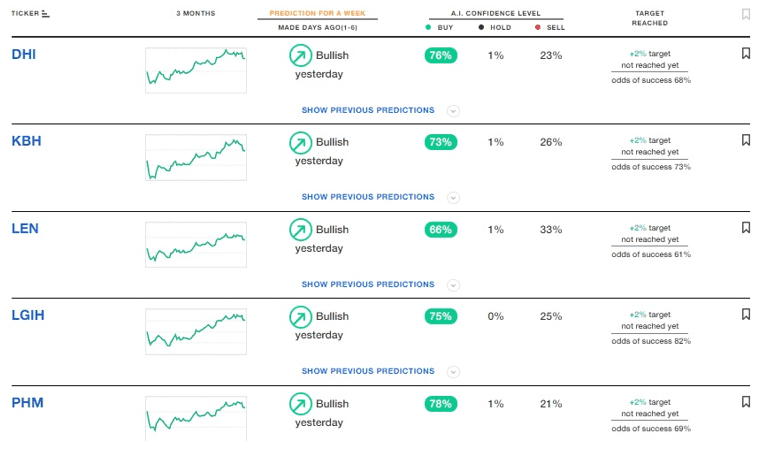 Personally I think these stocks could see an upward trend for several quarters. There are a number of the stocks in the group that have shot up considerably from their March lows. This has put several members of the industry in overbought territory on their weekly charts, but the selling we saw in the first half of this week could be providing a short-term buying opportunity.

If we see additional selling in the next few weeks, it could provide a long-term buying opportunity. A correction that lasts a few weeks will move the stocks out of overbought territory. Given the strong fundamental ratings of the five stocks listed above, I will be looking for a possible entry point for a trade that lasts for several months or even a couple of quarters.