Over the last five weeks, International Business Machines (NYSE: IBM) has dropped 23% thanks to a disappointing earnings report and the announcement that it is buying cloud-software firm Red Hat (NYSE: RHT).

The sharp drop has the stock within reach of a critical support level. IBM fell from early 2013 through the beginning of 2016. When that bearish phase ended, the stock seemed to find support in the $110 area as the stock bounced around the level for three weeks before reversing upward. 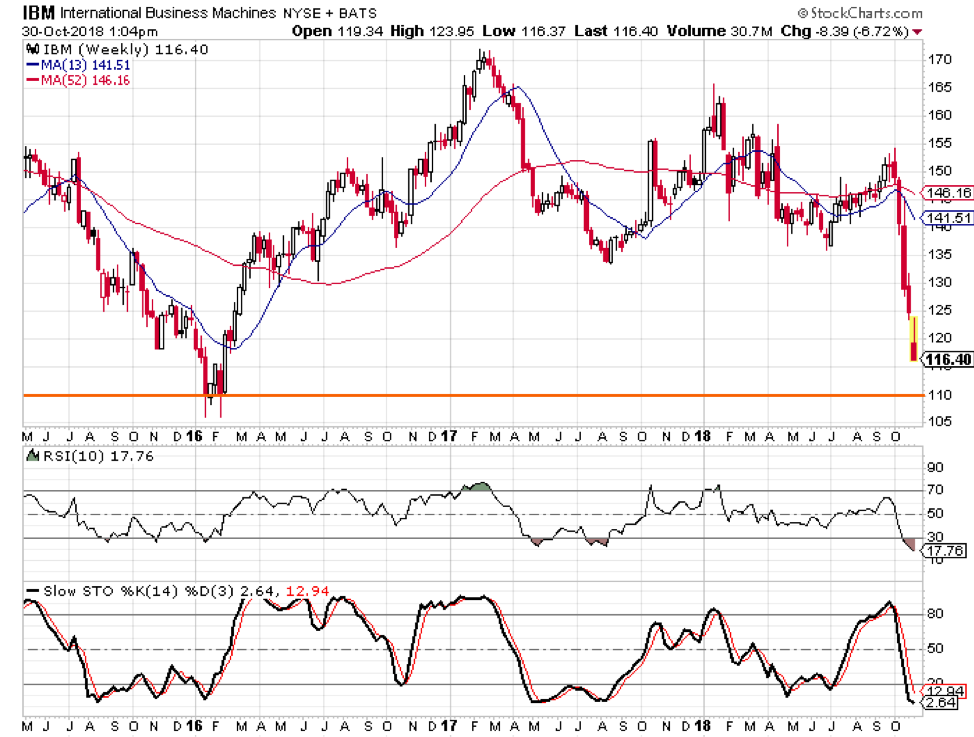 At this point, value investors and dividend investors alike have to be looking at IBM. The yield for IBM has jumped to over 5% thanks to the price decline and the recently announced dividend of $1.57 per quarter.

Earnings for the last four quarters have totaled $14.09 and given the current price, the P/E ratio is at approximately 8.25. It isn’t very often you see an established company like IBM trading at a P/E ratio under 10 and offering a 5% yield.

In addition to the news about IBM buying Red Hat earlier this week, the company announced on Tuesday that the board has approved an additional $4 billion in its stock buyback plan. This should also be a point of attraction to value investors as the float is being lowered.

The two biggest concerns I have about IBM right now are the stagnant sales and earnings, and the possibility that the company is overpaying for Red Hat. Over the last three years, IBM’s earnings have declined by an average of 2% per year and sales have declined at a rate of 1% per year.

Red Hat should be able to help with the earnings and sales growth as it has averaged earnings growth of 23% per year over the last three years, while sales have increased at a rate of 19%.

Like I stated before, value investors and dividend investors should potentially give consideration IBM if they don’t own the stock already. A P/E ratio below 10 and a 5% yield are hard to come by. For growth investors, having Red Hat in the mix has to be appealing for the possible growth it can add to IBM’s top and bottom lines.

For me, I would consider buying at the current level with a drop below $105 as a stop. The other possibility is to wait and see if the stock drops to the $110 level and then try to pick it up there. If I did that, I would use a move below $100 as a stop.