iQIYI trending lower ahead of earnings next week

I have written about Chinese firm iQIYI (Nasdaq: IQ) before. I wrote about the online video platform back at the beginning of July when the stock was trading up near the $22 level and I was concerned about a fall in the stock price at that time. Here it is a few months later and I am getting a bearish signal on the stock once again.

While the signal in July and the current signal are based on technical factors, they are backed by the poor fundamentals of the company.  iQIYI went public on March 28, 2018 and it has yet to turn a profit—it has lost money in every single quarter. Sales have been increasing, but earnings have yet to reach positive territory and they are expected to be worse for the third quarter of 2019 than they were in the third quarter of 2018. The company reported a loss of $0.63 last year and analysts expect a loss of $0.72 per share when the company reports on November 6.

Sales have increased by 52% per year over the last three years, but they only increased by 11% in the second quarter. Despite the sales growth, earnings declined by 4% in the second quarter. This is a major concern in my opinion. When a young company continues to grow sales, but can't grow earnings, I immediately become worried about the management efficiency. When you combine the sales growth with the profit margin and the return on equity, you get the SMR rating and iQIYI's SMR rating is awful.

The Tickeron SMR rating for this company is 100, indicating weak sales and an unprofitable business model. SMR (Sales, Margin, Return on Equity) rating is based on comparative analysis of weighted Sales, Income Margin and Return on Equity values compared against S&P 500 index constituents. The score of 100 is the worst possible score a stock can get.

The Tickeron Profit vs. Risk Rating for this company is 100, indicating that the returns do not compensate for the risks. IQ’s unstable profits reported over time resulted in significant drawdowns within these last five years. A stable profit reduces stock drawdown and volatility. The average Profit vs. Risk Rating for the industry is 85, placing this stock worse than average. This rating is also the worst possible rating a stock can get.

Given this fundamental backdrop, it's hard to look at the stock with a bullish view and the chart doesn't really help matters. We see on the daily chart how the stock has been trending lower since February and now a downward sloped trend channel has formed. The stock didn't quite reach the upper rail of the channel, but with the stochastic readings being in overbought territory and making a bearish crossover, I don't think the stock will reach the upper rail this time around. 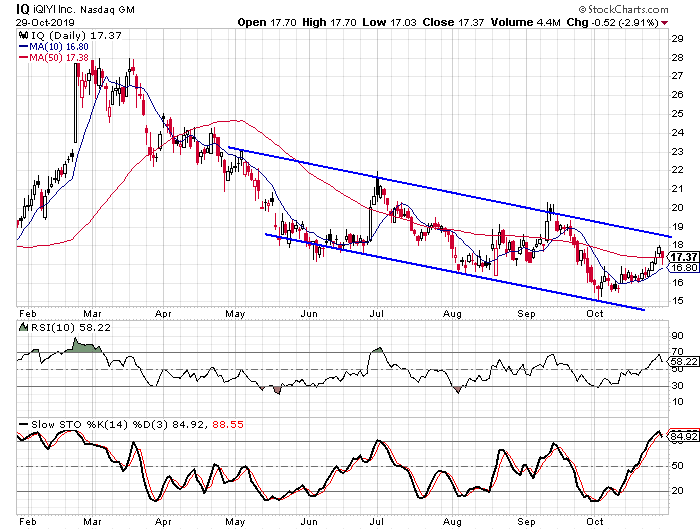 The Tickeron Trend Prediction Engine generated a bearish signal on iQIYI on October 28. The signal showed a confidence level of 69% and past predictions have been successful 72% of the time. The signal calls for a decline of at least 4% within the next month. 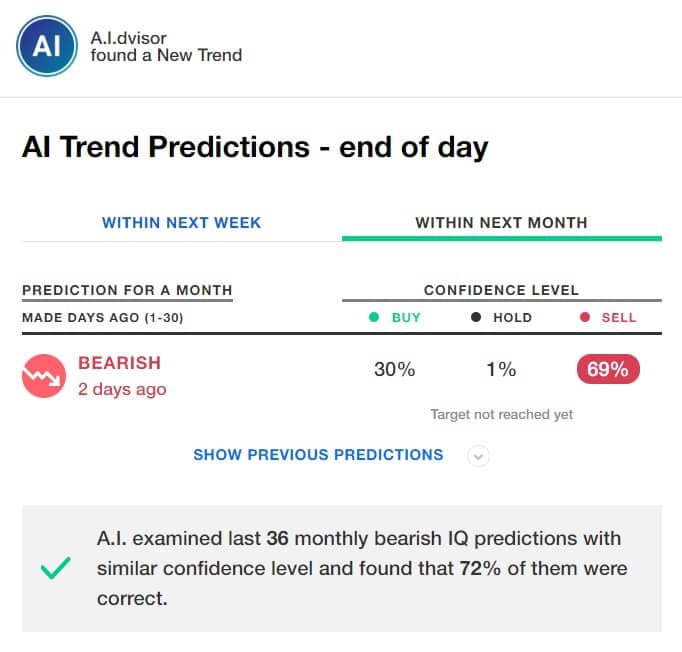 If there is a saving grace for iQIYI, it's the fact that the stock is not overly loved at this time. There are 22 analysts covering the stock at this time and only eight have the stock rated as a "buy". There are 12 "hold" ratings and two "sell" ratings. The overall buy percentage of 36.4% is well below average.

The short interest ratio is currently at 8.45 and that is much higher than average stock. Both the short interest ratio and the analysts' ratings are indicating there is extreme pessimism toward the stock at this time. Expectations seem to be pretty low for the stock, but given the chart and the fundamentals, the sentiment appears to be warranted.