Latin American markets really tumbled in the first half of November and that caused the iShares MSCI Brazil Capped ETF (NYSE: EWZ) and the iShares Latin America 40 ETF (NYSE: ILF) to drop over 5% from November 4 through November 14. Both funds jumped sharply on the 15th and look poised to rally based on a number of different indicators.

First, let's look at the EWZ. We see that the fund has been trending higher since the end of August and a trend channel has formed during this time. The ETF just bounced off of the lower rail of the channel this past week before the bounce on Friday. 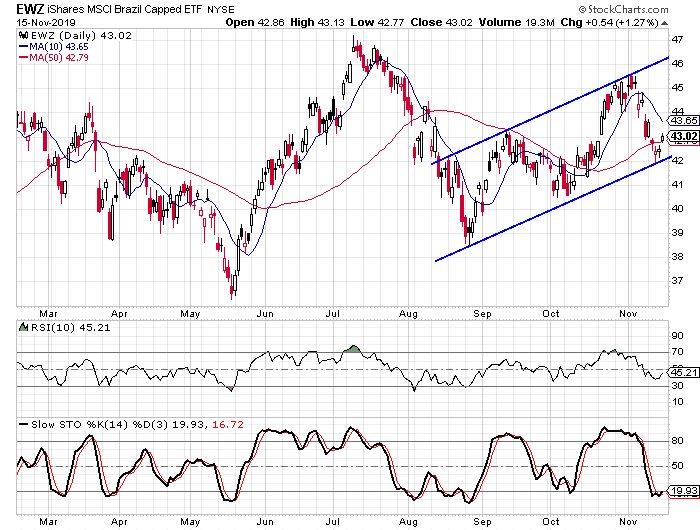 The daily stochastic readings are in overbought territory, but they performed a bullish crossover on Friday. The jump also caused the stock to move back above its 50-day moving average, which indicates a change from a downtrend to an uptrend. Accoriding to Tickeron's statistics, in 34 of 39 similar backtested cases where EWZ's price crossed above its 50-day moving average, its price rose further within the subsequent month. The odds of a continued uptrend are 87%.

Yet another indicator that is pointing to a rally is the Bollinger Bands. The fund fell below the lower Bollinger Band on November 13 and a price increase is expected as the ticker heads toward the middle band. In 40 of 46 cases where EWZ's price broke its lower Bollinger Band, its price rose further in the following month. The odds of a continued uptrend are 87%.

Turning our attention to the ILF, we see similar patterns and statistics. While the ILF includes stocks outside of Brazil, the fund is heavily populated with Brazilian companies. Like we saw with the EWZ, the ILF has been trending higher since late August and a trend channel has formed. The fund just bounced off the lower rail of the channel and the daily stochastic readings just made a bullish crossover. 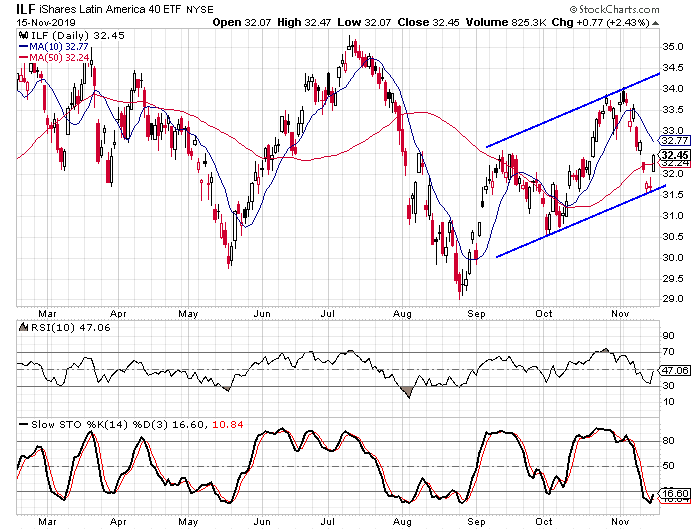 The ILF also dropped below its lower Bollinger Band on November 13 and the stats for this fund show increases in the stock price in 36 of 40 cases. The odds of a continued uptrend are 90%.

Obviously there is some overlap between these two funds and they will move in tandem with one another a great deal of time, but they can and will de-couple from time to time. The EWZ has performed a little better over the past year than the ILF, but because the ILF is a little more diversified beyond Brazilian stocks, it tends to be a little less volatile at times.