Liberty Global (Nasdaq: LBTYK) is a provider of video, broadband internet, mobile telephone, and land-line telephone services to European customers. The company was founded in 2004 and is based in London, England.

The company has been struggling in recent years with the company losing money and sales declining. The company is scheduled to report earnings again on August 8 and analysts expect the company to report a loss of $0.04. Over the last three years, sales for the Liberty Global have declined at a rate of 19% per year. Sales were down by 6% in the most recent quarterly report and they are expected to decline by 23% in the upcoming report.

There are other fundamental factors that reflect the hard time the company has been having as well. The return on equity is a -7.4% and the profit margin is a paltry 1.4%. The company is also saddled with a great deal of long-term debt.

In addition to the poor fundamentals, the technical picture for Liberty Global is pointing toward a rough patch for the stock. We see on the weekly chart that the stock found support at the $28 level on numerous occasions in 2016 and 2017. The stock dipped below the price several times, but never closed out a week below it. 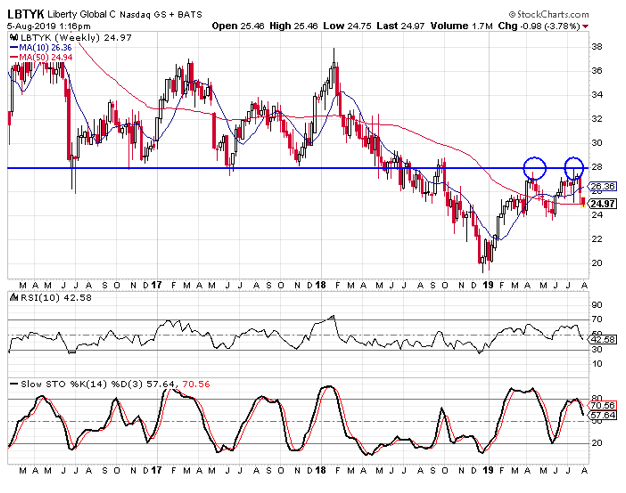 The stock eventually fell below $28 in the second quarter of 2018 and would eventually fall below $20. The stock rallied back in the first quarter of 2019, but it ran in to resistance at the $28 level and dropped back to $24. It rallied back up to $28 last month, but once again stalled at that price. Now it looks as if the stock has formed a double-top formation. For this pattern to be confirmed the stock will need to fall back below $24 and if it does that, there is a good chance it drops back down to $20.

The short interest ratio for the stock is at 4.34 currently and that is slightly higher than average. The ratio jumped from the end of June through mid-July as the number of shares sold short jumped from 6.8 million shares to 8.8 million shares. As the number of shares sold short was jumping, the average daily trading volume dropped from 2.5 million shares per day to 2 million shares per day. Meaning the numerator increased while the denominator declined—thus the big jump in the short interest ratio. The jump does indicate an increase in bearish sentiment.

Overall we see that the fundamentals aren’t looking so good, the technical picture looks bearish, and the sentiment is mixed. This will make it difficult for the stock to move higher in the coming months.