McDonald’s (MCD) reported second quarter earnings results back on July 26. The company reported earnings of $2.05 per share on the quarter and that matched the estimates of analysts. Initially the stock moved higher after the report, but it pulled back with the rest of the market over the past week.

Looking at the company’s management efficiency measurements we see a profit margin of 28.3% and an operating margin of 41.8%. I looked at three different sites for a return on equity, but none of them had an ROE for McDonald’s. Regardless, the margins are well above average. It is also worth noting that the company doesn’t have any long-term debt.

As far as valuations for McDonald’s, the P/E ratio is a very reasonable 28.2 and the stock is trading at a discount to its book value.

As far as the technical picture, the stock has performed very well over the last three years. It has been trending higher within a trend channel on the weekly chart and the stock was at the upper rail of that channel ahead of earnings. The more immediate outlook is on the daily chart and it shows how the stock has been climbing in the last six months. Like on the weekly chart, the daily chart shows a trend channel defining the various cycles within the overall trend. 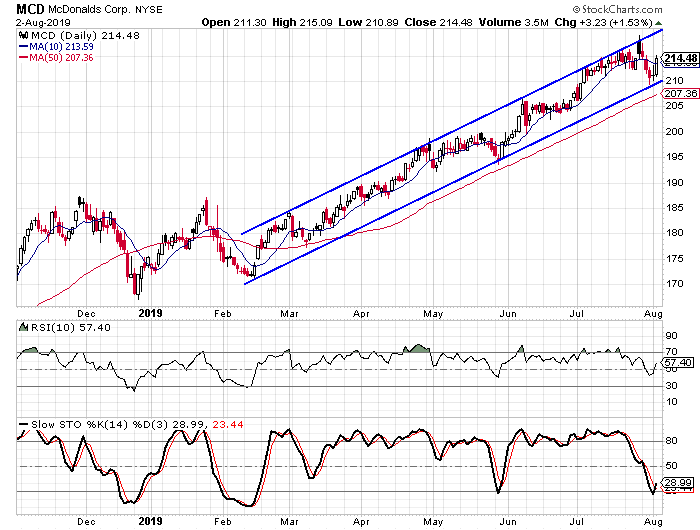 The stock dropped to the lower rail of the channel in the past week and that rail was formed by connecting the lows from February and May.

We also see that the daily stochastic readings dipped down to oversold territory in the past week and made a bullish crossover on August 2. In addition to this bullish signal, the Tickeron overview for McDonald’s shows other bullish signs for the stock.

We this from that overview:

MCD in Uptrend: price expected to rise as it breaks its lower Bollinger Band on July 31, 2019.

This price move signals that MCD may jump back above the lower band and head toward the middle band. Traders may consider buying the stock or exploring call options. In 22 of 31 cases where MCD's price broke its lower Bollinger Band, its price rose further in the following month. The odds of a continued Uptrend are 71%.

Tickeron’s Trend Prediction Engine also generated a bullish signal for the stock on August 1 and that signal showed a confidence level of 72%. The signal calls for a gain of at least 4% within the next month.

The short-interest ratio for the stock is at 2.5 currently with 6.8 million shares sold short and average daily trading volume of 2.78 million. The number of shares sold short-changed very little from the end of June through the middle of July.