Micron Technology Faces Resistance as It Gets Ready to Report Earnings

Over the last few years, Micron Technology (MU) has seen its stock struggle compared to the overall market. It has also struggled compared to its peers in the semiconductor industry. The stock peaked just below $65 back in June 2018 and then proceeded to fall by over 50% and drop below the $30 level. The stock did rally in 2019 and got back above the $60 level in early 2020. The market selloff in the first quarter of this year caused the stock to drop back down below $32.50. The stock has rebounded from the March low, but it could be facing some resistance from a downward sloped trend line that connects the highs from this year. 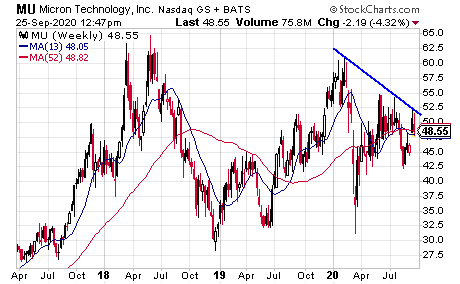 If we look at the Philadelphia Semiconductor Index over the same time period, it has performed much better. The index fell in the selloff that occurred in the fourth quarter of 2018 and it dropped pretty sharply in the first quarter of this year. If we go back to June ’18, the index has increased by approximately 5o% while Micron has dropped by 20%. 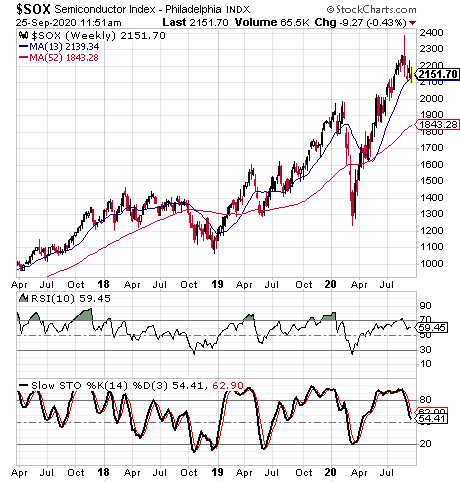 If we look at Tickeron’s screener for Micron, we see that the artificial intelligence platform has the stock rated as a buy. But there are mixed signals from the fundamental indicators, the technical indicators, and the A.I. Predictions.

I have written about Micron on another site on several occasions over the last couple of years. The first article I wrote about the company was an earnings preview in June 2018. I wouldn’t say the article was bearish, but more of a cautious article as I felt the sentiment was extremely bullish at the time. You should have seen the comments I got from readers after that article was published. Readers were telling me I was crazy and that I didn’t know what I was talking about. Those were the nicer ones. I guess I got the last word on that when the stock dropped over 50% in the next six months.

Here we are two years later, and the sentiment is still skewed to the bullish side, but it isn’t nearly as extreme as it was back then. In June ’18, there were 30 analysts following the stock with 27 “buy” ratings and three “hold” ratings. Currently we have 34 analysts following the stock with 26 “buy” ratings, seven “hold” ratings, and one “sell” rating. If we look at the ratings in terms of the buys as a percentage of the total, the buy percentage in 2018 was 90%. Now the ratio is 78.8%.

Given all of the information—the fundamentals, the technical analysis, and the sentiment indicators, I think the outlook for Micron is a muddled one. The stock faces resistance from the trend line I pointed out on its chart and the sentiment is still a little more bullish than it should be. The fundamentals are good, but not as good as they once were.