Micron Technology in Overbought Territory Heading in to Earnings

In addition to writing for Tickeron, I also write independently at Seeking Alpha (SA). In June 2018, I made a concerted effort to increase my article submissions at SA and one of the first articles I wrote back then was an earnings preview on Micron Technology (MU). In that article I urged readers to take a cautious stance on the stock due to how bullish investors appeared to be at the time. I liked the fundamentals on the stock, but the stock had rallied sharply and the sentiment indicators were concerning.

Two and a half years ago, earnings and sales growth were the highlights of the fundamental picture. The return on equity and profit margin were also really good. Again, the fundamental picture wasn’t the problem. We see on the chart below that the stock had doubled in less than a year. The blue arrow shows when my article was published. You can see how the 10-week RSI and the weekly stochastic indicators were right at the edge of overbought territory. Look where they are now—they’re even higher and they just made a turn lower. 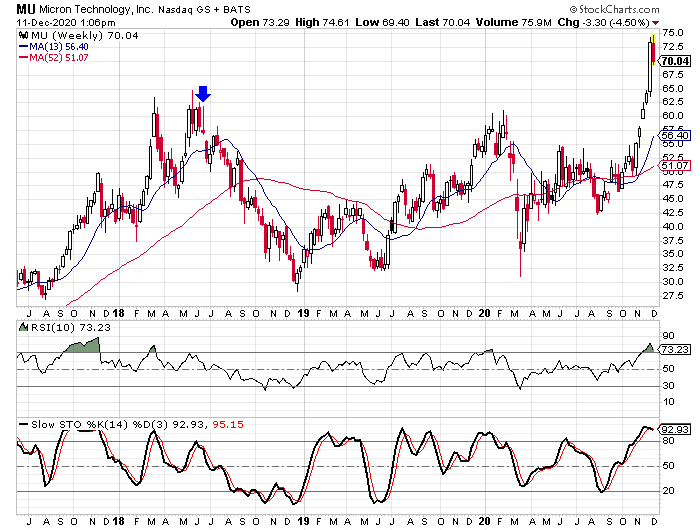 As I mentioned earlier, the sentiment indicators were also a problem. There were 30 analysts covering the stock back then and 27 of the 30 had the stock rated as a “buy”. The other three had the stock rated as a “hold”. Now there are 35 analysts covering the stock with 28 “buy” ratings, five “hold” ratings, and two “sell” ratings. This means the buy percentage fell from 90% to 80%. The buy percentage is still higher than the average stock, but has come down some.

The short interest ratio was low at 1.14 in June ’18 and it’s at 1.92 currently. The indicator is still more bullish than the average stock, but like the analysts ratings, it’s not as bullish as it used to be.

Another factor in why I was urging investors to be cautious was a big jump in the earnings estimates ahead of the report. In the 30 days leading up to the report, the consensus EPS estimate jumped from $2.85 to $3.12. The company itself had issued statements, adjusting its guidance and analysts adjusted too. Looking at today’s consensus EPS estimate, it’s at $0.71 and it was at $0.47 just 30 days ago.

The situation is starting to look very similar to what we saw in 2018. The stock has more than doubled in the last eight months and it’s in overbought territory. The sentiment indicators suggest that the stock is getting a lot of love from analysts and short sellers, and the consensus estimate has jumped significantly in the last 30 days. However, the fundamentals aren’t as good as they used to be.

The earnings and sales growth are still decent, but they aren’t nearly as good as they were two and a half years ago. The ROE is below average now and the profit margin is in the average range.

The changes in the fundamentals and the overbought status helps explain why Tickeron’s scorecard has Micron Technology rated as a “sell” right now.