The most recent mania to hit the market seems to be stocks with high short interest. The huge spikes in Gamestop (GME) and AMC Entertainment (AMC) brought attention to an indicator that I’ve been using for 20 years. The most recent short interest reports recently came out and they are updated through January 15.

Some investors have been buying stocks simply because of their short interest level, but I am of the opinion that some stocks have such poor fundamentals that they should have high short interest levels. The stocks may rally over the short term, but in the end, the fundamentals are so bad that the company isn’t worth owning over the long term. These companies have seen earnings and revenue decline year after year and have poor profitability measurements.

Conversely, there are companies with high short interest levels that have strong fundamentals, have seen strong earnings and revenue growth, and have good profitability measurements. Companies that fit this description are much more appealing to me.

Once the new reports were published, I uploaded 37 stocks in to the Tickeron screener. These stocks were the ones with the highest percentage of short interest compared to the number of shares in the public float. From that list of 37 stocks, I isolated eight stocks that had an overall fundamental picture that I liked.

Of the eight stocks, the Tickeron scorecard has five with “strong buy” ratings, one with a “buy” rating, and two with “sell” ratings. The scorecard ratings are a combination of fundamental and technical analysis. 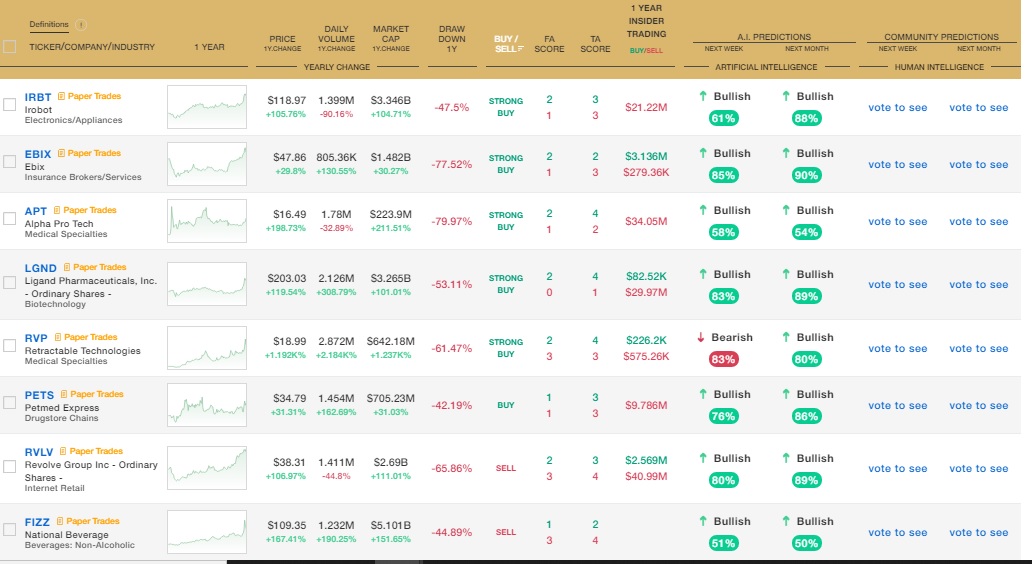 Several things jumped out at me about the eight stocks. First, all eight have received monthly bullish signals from Tickeron’s trend prediction tool over the last few days. Six of the eight signals have confidence levels over 80%. This suggests that these eight stocks have a high probability of moving higher over the next month.

The second thing that jumped out at me was the fact that six of the eight stocks have positive marks in one specific indicator that I rely on heavily—the SMR Rating. The only two stocks that don’t have a good SMR rating are Petmed Express (PETS) and National Beverage (FIZZ). Even those two companies have neutral readings in the category.

While I arrived at this list of stocks due to the short interest as a percentage of the float, there is another indicator that I like to look at as well and that is the short interest ratio. This indicator measures the number of shares sold short divided by the average daily trading volume. What this tells us is how long it will take short sellers to cover their positions based on the average daily volume. 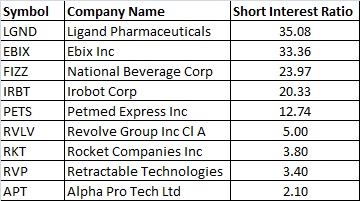 My suggestion is to keep an eye on these stocks because if they start or continue to rally, the unwinding of the short positions can push the stock higher and higher.