Mixed Signals for Cisco Systems ahead of earnings

Cisco Systems (Nasdaq: CSCO) is set to report fiscal first quarter earnings on Wednesday, November 13, after the closing bell. The tech bellwether is expected to report earnings of $0.81 per share. I am pretty certain the company will beat its EPS estimate because it almost always does. Cisco is the king of beating earnings by a penny or two—they have been doing it for years. The question is, how will investors react to the earnings report? That is what really matters.

Heading in to the report there are some mixed signals from the daily and weekly charts. On the daily chart we see that the stock has rallied over the last month or so and that has put the stochastic readings in overbought territory. The indicators did make a bearish crossover on November 11. 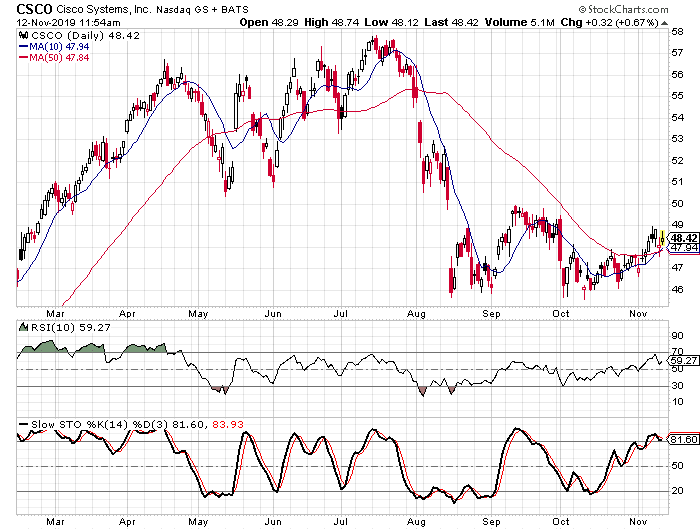 Looking at the weekly chart we see a stock that has just hit an upwardly-sloped trend line that connects the lows from 2017 and 2018. That trend line is just above the 104-week moving average (two years of data). 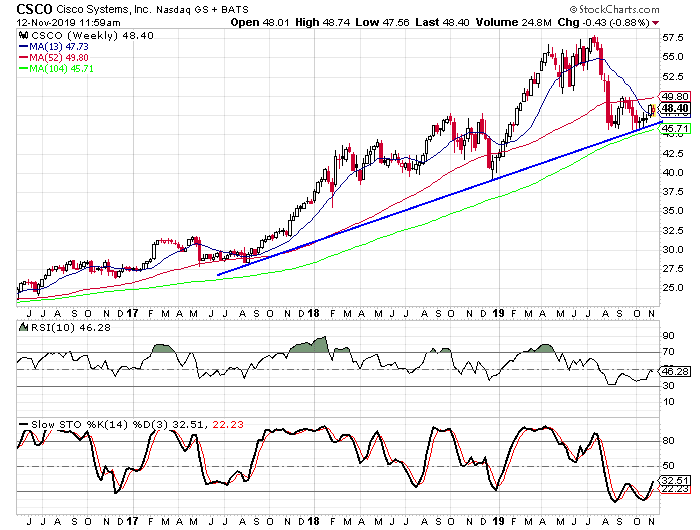 We also see that the weekly stochastic readings have just moved out of oversold territory in the last few weeks. The indicators did a little double-dip over the last few months, but the momentum seems to have changed a little in the past week or so.

If we combine the ROE, the profit margin, and the sales growth we get the SMR rating from Tickeron. For Cisco the rating is 20 and that indicates very strong sales and a profitable business model. SMR (Sales, Margin, Return on Equity) rating is based on comparative analysis of weighted Sales, Income Margin and Return on Equity values compared against S&P 500 index constituents. The best rating a company can get is a 1 and the worst rating is a 100. Cisco is in the top 20th percentile.

One area of concern is the Tickeron PE Growth Rating. Cisco scores a 97, pointing to worse than average earnings growth. The PE Growth rating is based on a comparative analysis of stock PE ratio increase over the last 12 months compared against S&P 500 index constituents. A rating of 1 indicates highest PE growth while a rating of 100 indicates lowest PE growth. Furthermore, the PEG ratio is (0.0) for CSCO, as compared to the industry average of (4.1).

As far as the sentiment indicators for Cisco, they run the gamut. Analysts' ratings are slightly skewed to the bearish side, the short interest ratio is skewed to the bullish side, and the put/call ratio is neutral.