Oil producer Hess Corp. (NYSE: HES) is hitting several different support points on its chart and it got a bullish signal from the Tickeron Trend Prediction Engine on September 30. While these are positive signs for the short-term outlook, there are some other indicators that are possible concerns for the long term.

Let’s look at the chart first. We see on the daily chart that a trend channel has formed over the last four months and the stock just hit the lower rail of the channel earlier this week before bouncing a little. 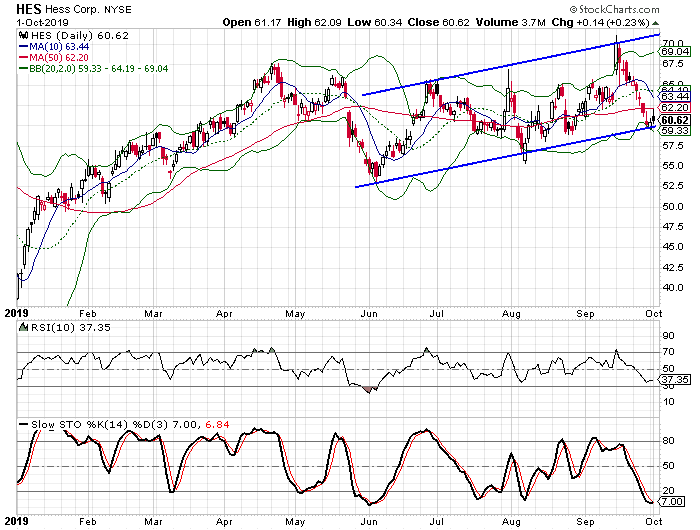 Yet another possible positive sign for the stock is the fact that the daily stochastic readings are in oversold territory and made a bullish crossover on October 1. We saw similar moves at the beginning of June and the beginning of August and both times the stock rallied nicely in the month that followed.

As was mentioned previously, Tickeron’s Trend Prediction Engine generated a bullish signal for Hess on September 30. That signal showed a confidence level of 75% and it calls for a gain of at least 4% within the next month. Previous signals on the stock have been accurate 76% of the time. 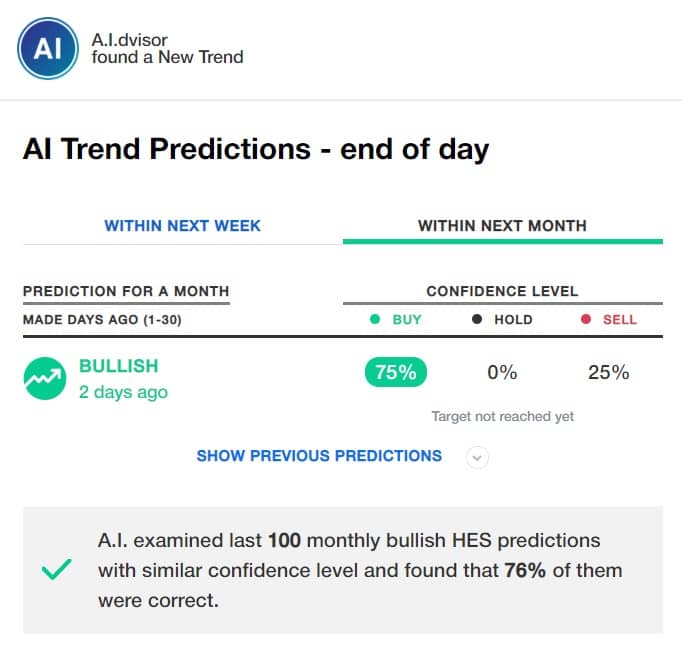 While many of the technical indicators point to an upward move, the fundamental indicators are mixed. The Tickeron PE Growth Rating for this company is 17 and that points to outstanding earnings growth. The PE Growth rating is based on a comparative analysis of stock PE ratio increase over the last 12 months compared against S&P 500 index constituents. A rating of 1 indicates highest PE growth while a rating of 100 indicates lowest PE growth.

Both the PE Growth Rating and the Valuation Rating are better than the average stock, but unfortunately there are several other indicators where Hess is below average. The Tickeron SMR rating for this company is 92, indicating weak sales and an unprofitable business model. The SMR (Sales, Margin, Return on Equity) Rating is based on comparative analysis of weighted Sales, Income Margin and Return on Equity values compared against S&P 500 index constituents.

The Tickeron Profit vs. Risk Rating for this company is 100, indicating that the returns do not compensate for the risks. Hess’ unstable profits reported over time resulted in significant drawdowns within these last five years. A stable profit reduces stock drawdown and volatility. The average Profit vs. Risk Rating for the industry is 97, placing this stock worse than average.

Something that could help Hess move past the few negative indicators is the sentiment toward the stock. There are 26 analysts covering the stock at this time with 11 “buy” ratings, 13 “hold” ratings, and two “sell” ratings. This puts the buy percentage at 42.3% which is well below average and indicates less optimism.