Sometimes we see stocks with good fundamentals that enter a downward trend and have a hard time breaking out of it. That is what happened with computer hardware manufacturer NetApp (NTAP). NetApp peaked up near $82 back in September ’18—the prices on the chart below are adjusted for dividend payments. The downward cycle started and over time a trend channel formed that defined the different cycles within the overall downward trend. The stock would eventually hit a low of $33.50 back in March. 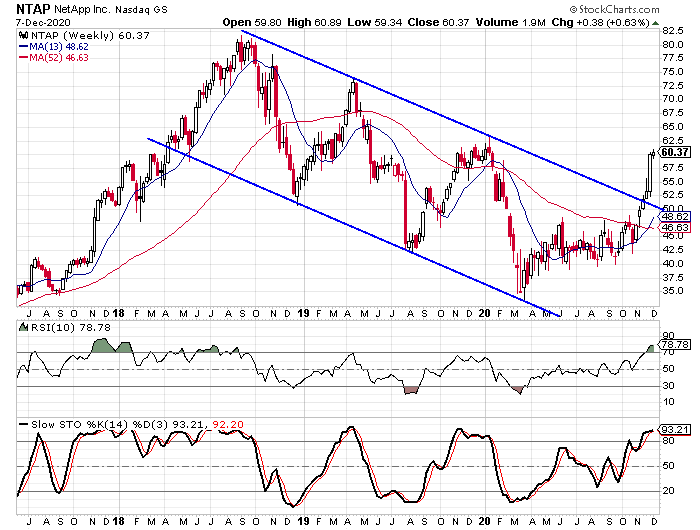 The rally off of the March low has moved NetApp back above $60 and it appears that the most recent pop has moved the stock out of the downwardly sloped channel it was caught in for two years.

I have written about NetApp several times over the last few years and I can tell you that the fundamental indicators have been good during this whole time—even as the stock was trending lower. From an article I wrote in November ’18, I can tell you that the company was averaging EPS growth of 21% per year and was expected to see earnings grow by 24% in fiscal 2019.

NetApp’s profitability measurements at the time were impressive. The return on equity was 40.6% and the profit margin was at 19.6%. The operating margin was at 17.15% back then and that was above average compared to other companies.

In addition to the factors listed above, TIckeron's AI platform found additional bullish signals for the stock.