Most of the big oil services companies have reported earnings already for the third quarter. The sector has been trending higher over the last month as those earnings reports have been released, but many of the stocks are now in overbought territory based on their daily stochastic readings. On November 7, four of top six holdings in the VanEck Vectors Oil Services ETF (NYSE: OIH) appeared on a bearish scan that I run each night. One of the factors in the scan is a bearish crossover from the stochastics and that the readings are at or near overbought territory.

We see on the daily chart of the OIH that was in overbought territory before the indicators turned lower in the past week. 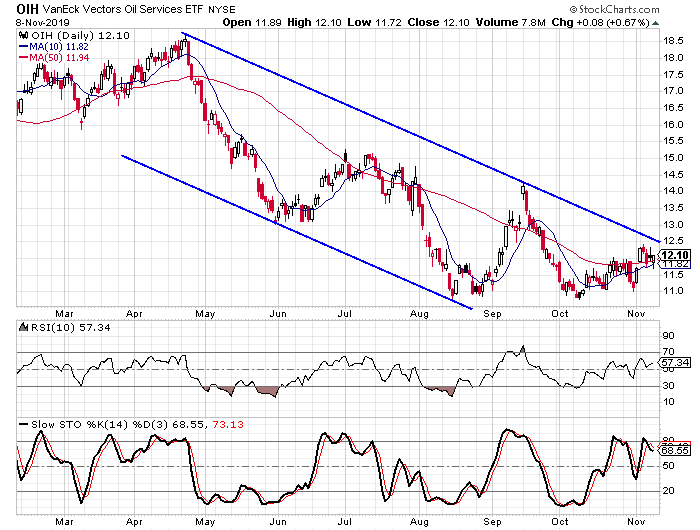 The four holdings of the OIH that appeared on my bearish scan were Halliburton (NYSE: HAL), Helmerich & Payne (NYSE: HP), National Oilwell Varco (NYSE: NOV), and Schlumberger (NYSE: SLB). I took those four stocks and ran them through Tickeron’s Screener in order to see how the companies were doing on a fundamental basis. The results were not good. We see in the table below that all four get Profit vs. Risk rating scores of 100 and that is the worst possible score a stock can get. The SMR ratings from Tickeron are all in bottom 10% of ratings. Halliburton and Helmerich & Payne both have Price/Growth ratings in the bottom 20% while Schlumberger’s rating is in the bottom quartile of readings.

I also ran the stocks through Investor’s Business Daily’s ratings system and what came out was more of the same—lots of poor readings and only one really positive reading. The lone rating in the top quartile was Helmerich & Payne’s EPS rating at 76. The SMR ratings for Halliburton and Helmerich & Payne are average. All of the other readings are below average with many of them being in the bottom 20% – those are designated with the red highlights.

The one category from IBD that isn’t a fundamental indicator is the Relative Price Strength rating. We see that Halliburton and Helmerich & Payne both rank in the bottom 20% in this category which measures the stock’s price performance against all other stocks for the past year. National Oilwell Varco and Schlumberger fare a little better, but they are both still in the bottom quartile in terms of price performance.

Overall, the oil service sector looks like a pretty risky bet at this point in time. Of these four stocks, only National Oilwell Varco hasn’t reported earnings yet, so I wouldn’t look to earnings as a catalyst that helps improve the fundamental picture.