Parsley Energy (NYSE: PE) is an oil and gas exploration company based in Austin, Texas. The company is struggling to keep up with past earnings performance and the stock has been trending lower as a result. .

The Tickeron Fundamental Analysis Overview shows several negative factors for the stock. The Tickeron PE Growth Rating for this company is 77, pointing to worse than average earnings growth. The PE Growth rating is based on a comparative analysis of stock PE ratio increase over the last 12 months compared against S&P 500 index constituents. A rating of 1 indicates highest PE growth while a rating of 100 indicates lowest PE growth. Furthermore, the PEG ratio is (7.7) for PE, as compared to the industry average of (1.0).

The most recent quarterly report saw earnings decline by 18% on a year over year basis and analysts expect earnings to decline by 3% for the year as a whole.

The company’s management efficiency measurements are mixed with a strong profit margin of 32.5%, but the return on equity is well below average at 7.7%.

The daily chart for Parsley shows that the stock has been trending lower over the last four months and there is a trend channel that defines the cycles within the overall downward trend. The upper rail of the channel connects the highs from April, May, June, and July. The current price is slightly below the upper rail, but the 50-day moving average is just overhead. 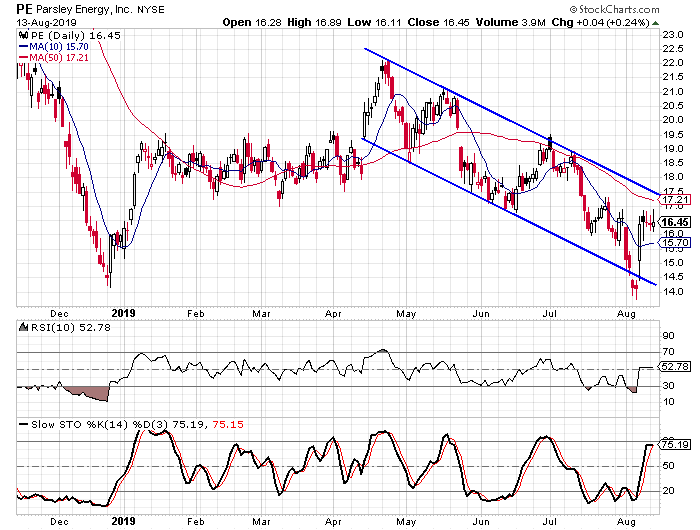 Between the 50-day and the upper rail, you have two different layers of resistance the stock will have to break through in order to move higher. We see that the daily stochastic readings are just below overbought territory, but they look like they are getting ready to make a bearish crossover.

The Tickeron Profit vs. Risk Rating for this company is 100, indicating that the returns do not compensate for the risks. PE’s unstable profits reported over time resulted in significant drawdowns within these last five years. A stable profit reduces stock drawdown and volatility.

Another factor working against Parsley Energy is the sentiment toward the stock. According to the Wall Street Journal, there are 37 analysts following the stock currently and 33 of them have it rated as a “buy”. The other four have the stock rated as a “hold” and this gives us an overall buy percentage of 89.2%. This is well above the buy percentage for the average stock and it is especially concerning for a stock that has underperformed.

The problem with having a high buy percentage and a low short interest ratio is that there are fewer catalysts that can drive the stock higher. When almost 90% of analysts have the stock rated as a “buy”, there is very little chance of an upgrade that can create some positive movement. With the short interest ratio being so low, the odds of a short-covering rally are also low.