Most gaming stocks have been underperforming the overall market for the last six months. Ongoing concerns about the trade war and the unrest in Hong Kong have taken their toll on casino operators around the world. Even with the group as a whole underperforming, Penn National Gaming (Nasdaq: PENN) has performed worse than its peers. The stock is down over 20% in the past six months while the S&P is up just over 5% during the same time period.

Looking at the daily chart we see that there is a trend channel that has formed over the last six months and it defines the cyclical moves within the overall downward trend. The upper rail connects the highs from March, April, and May. The stock did move above the upper rail in August, but it wasn’t able to close above the trend line. The parallel lower rail connects a number of lows over the last six months. The stock is hovering just below the upper rail at this time. 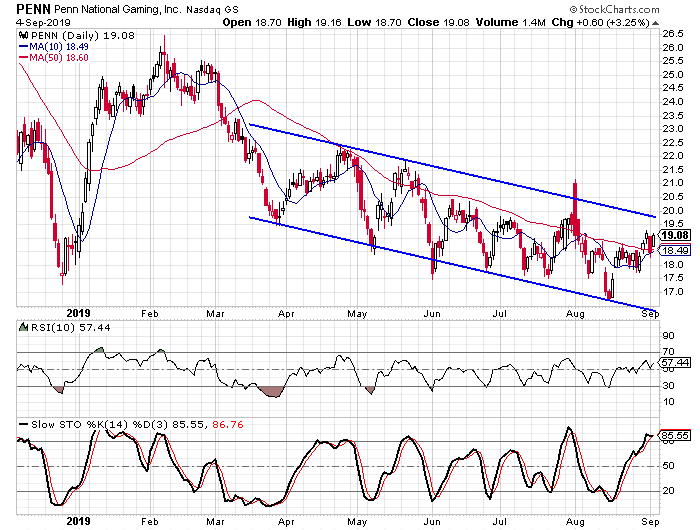 In addition to the bearish crossover from the stochastic readings, the Tickeron Trend Prediction Engine generated a bearish signal on Penn National Gaming on September 3. The signal showed a confidence level of 86% and past predictions on the stock have been successful 69% of the time. The signal calls for a decline of at least 4% within the next month. 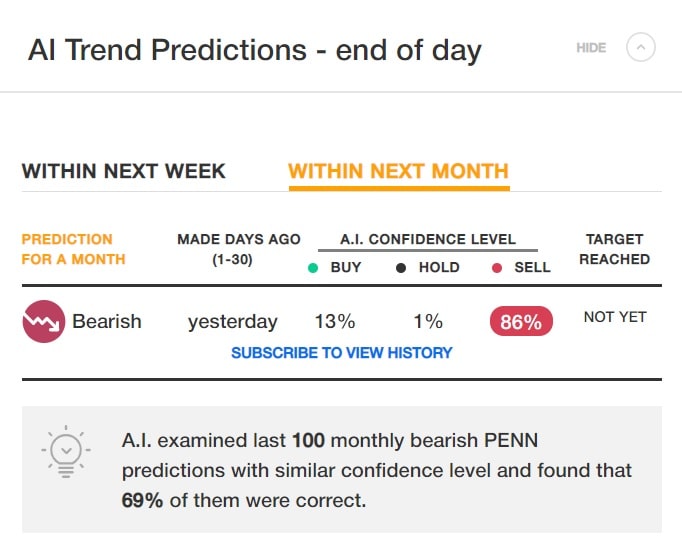 The fundamentals for Penn National are mixed. Earnings have declined on a year over year basis in each of the last two quarters. In the most recent quarterly report the earnings declined by 23% compared to the previous year. Analysts expect earnings for 2019 as a whole to decline slightly.

Another concern regarding Penn National’s fundamentals is the profit margin. The margin is currently at 2.5% which is well below the profit margin for most companies and lower than the industry average.

On the positive side, sales have been growing by 11% per year over the last three years and they were up by 60% in the most recent quarter. The return on equity is also above average at 28.4%.

Looking at the Tickeron Fundamental Analysis Overview we see that the Tickeron Profit vs. Risk Rating for Penn National Gaming is 73, indicating that the returns do not compensate for the risks. PENN’s unstable profits reported over time resulted in significant drawdowns within these last five years. A stable profit reduces stock drawdown and volatility.

Like the fundamentals, the sentiment toward Penn National Gaming is mixed. Analysts are overly bullish on the stock with 12 of 13 analysts rating the stock as a “buy”. The other analyst has the stock rated as a “hold”. This puts the buy percentage at 92.3% and that is much higher than the buy percentage for an average stock. It is particularly concerning to see such optimism for a stock that has been trending lower and a company that hasn’t been performing all that well.

The short interest ratio is well above average at 4.9 and that is indicative of extreme pessimism. While the ratio is high currently, the ratio has declined in recent months. The current reading is from the mid-August report and it is down from the mid-July reading of 9.8.