Poor fundamentals and the $26 level keeping Adient in check

Irish automotive supply manufacturer Adient (NYSE: ADNT) has been struggling over the past 10 months. The company manufactures seats, seat systems, and interiors for use in passenger cars, commercial vehicles, and light trucks. Its stock gapped lower last November and hasn’t been able to fully recover since then.

If we look at the daily chart for Adient we see that the stock dropped below the $26 level when it gapped down after a disappointing earnings report. After that drop, the stock has made several attempts to move back above the $26 mark but has been turned away each time. The stock gapped higher and moved up nicely on August 6 after the company reported better than expected earnings. Even with that good news, the stock was not able to break through the resistance and looks to be headed lower once again. 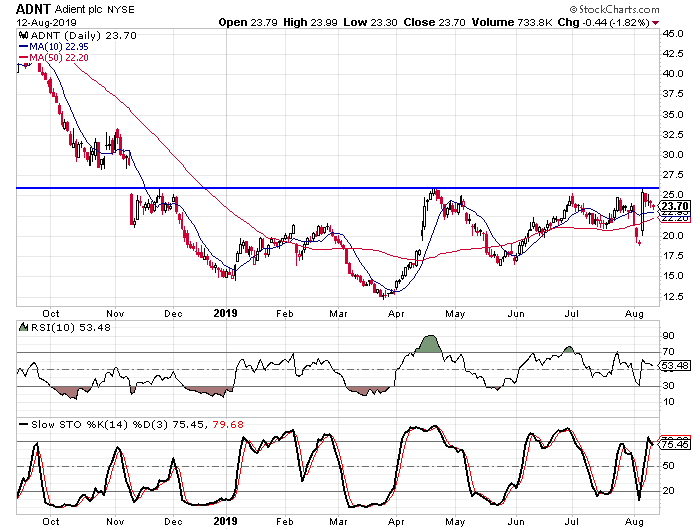 We see that the daily stochastic readings reached overbought territory a few days after the earnings surprise, but now the indicators have turned lower and made a bearish crossover on August.

In addition to facing technical resistance, the company’s fundamental indicators are well below average. Looking at the Tickeron Fundamental Analysis Overview we see that the “Tickeron Valuation Rating of 78 indicates that the company is slightly overvalued in the industry. A rating of 1 points to the most undervalued stocks, while a rating of 100 points to the most overvalued stocks. This rating compares market capitalization estimated by our proprietary formula with the current market capitalization.” One item in the valuation formula that really stands out is the P/E ratio at 182.

Also from the Tickeron overview we see that the Tickeron SMR rating for this company is 100, indicating weak sales and an unprofitable business model. SMR (Sales, Margin, Return on Equity) rating is based on comparative analysis of weighted Sales, Income Margin and Return on Equity values compared against S&P 500 index constituents.

Looking at some of the stats that comprise those ratings, we see that the company saw sales decline by 6% in the most recent quarter and has only been able to grow sales by 1% per year over the last three years. The profit margin is a paltry 3.6%.

Earnings have been declining at a rate of 27% per year over the last three years and they dropped by 74% in the most recent quarterly report. Analysts expect earnings to decline by 76% for this year as a whole.

The sentiment toward Adient is extremely bearish, but given the technical picture and fundamental outlook the bearish posture appears to be deserved. There are 14 analysts covering the stock and only four have the stock rated as a “buy”. There are seven “hold” ratings and three “sell” ratings.

The short interest ratio for the stock is at 5.4 and that is above average and indicates more bearish sentiment toward the stock than the average company. There are 10.6 million shares sold short currently and that figure is down from 11.2 million at the mid-July short interest report.

The idea of contrarian investing is to find stocks with good fundamentals and in an upward trend, but where the sentiment is extremely bearish—at least for bullish trades. For bearish trades you ideally want to find stocks with poor fundamentals, in a downward trend, and have excessive optimism toward them. In the case of Adient, the fundamentals are poor, and the stock is having trouble moving past the resistance at $26. The excessive pessimism from analysts and short sellers seems to be deserved and doesn’t really present a contrarian case.