Oil and gas exploration company Targa Resources (NYSE: TRGP) has been trending lower for almost a year now, falling from a high of $54.40 to a recent low of $32.00. The stock is below its 13-week moving average as well as the 52-week and the 104-week. 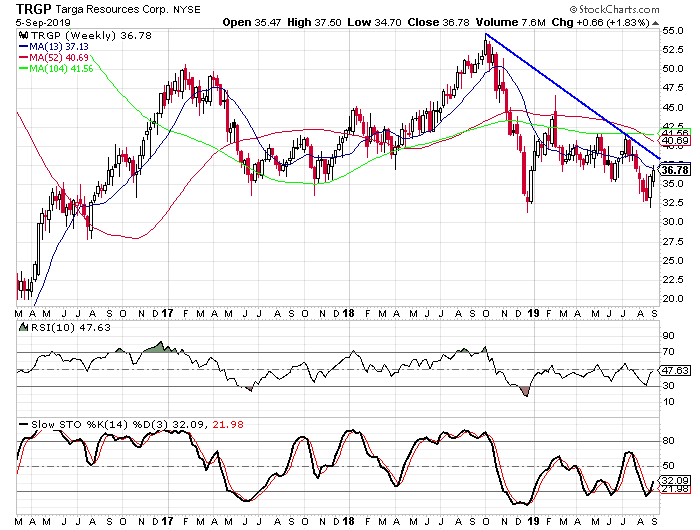 While the weekly chart shows how the stock has been declining, it is the fundamentals that seem to be driving the stock lower. The company has lost money in each of the last eight quarters and earnings and sales both declined in the second quarter. Earnings fell by 150% and sales were down 18%.

As a result of the poor earnings and sales performance, the company has a negative return on equity and the profit margin is a paltry 0.6%. As a result of these numbers, the Tickeron SMR rating for Targa Resources is 97, indicating weak sales and an unprofitable business model. SMR (Sales, Margin, Return on Equity) rating is based on comparative analysis of weighted Sales, Income Margin and Return on Equity values compared against S&P 500 index constituents. The best companies have an SMR rating of 1 and the worst SMR rating possible is 100.

The Tickeron Profit vs. Risk Rating for the company is 100, indicating that the returns do not compensate for the risks. Targa’s unstable profits reported over time resulted in significant drawdowns within the last five years. A stable profit reduces stock drawdown and volatility. The average Profit vs. Risk Rating for the industry is 87, placing this stock worse than average.

The Tickeron Valuation Rating of 83 indicates that the company is slightly overvalued in the industry. A rating of 1 points to the most undervalued stocks, while a rating of 100 points to the most overvalued stocks. This rating compares market capitalization estimated by our proprietary formula with the current market capitalization. One of the biggest factors in this rating is the P/E ratio of 40.22 while the industry average is only 22.92.

Turning our attention back to the technical analysis, the daily chart shows that the stock is overbought based on the daily stochastic readings. The indicators did make a bearish crossover on September 5 and that could be a bearish sign for the stock. 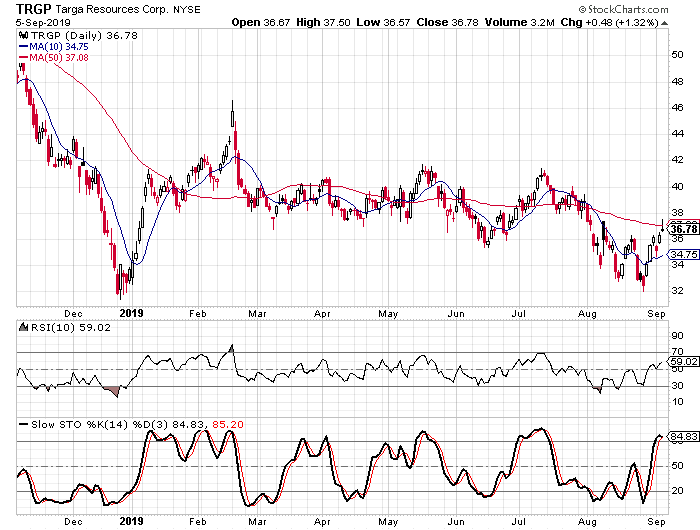 We also see that the candlestick for September 5 is an inverted hammer or a shooting star formation. This indicates that the stock gapped higher on the open, moved even higher during the day, but then fell back to close near the opening price. The significance of this formation is that it shows bulls in control at the open and during the day, but bears appeared to take control heading in to the close.

The Tickeron Trend Prediction Engine generated a bearish signal for Targa on September 3 with a confidence level of 65%. The signal calls for a drop of at least 4% within the next month. Past predictions on Targa have been successful 72% of the time. 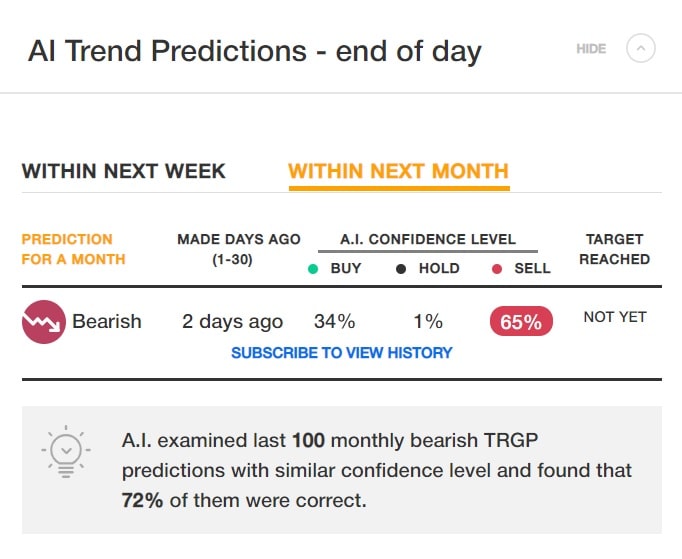 Looking at the sentiment indicators for Targa, we see some pessimism. There are 22 analysts following the stock with 16 “buy” ratings and six “hold” ratings. That puts the buy percentage at 72.7% which is in the average range. However, when you take in to account the poor stock performance and the poor fundamentals, you would think analysts would be more pessimistic than they are on the average stock.