Laureate Education (Nasdaq: LAUR) is a for-profit education company with a focus on countries outside the United States. The company operates through five segments—Brazil, Mexico, Andean, Rest of World, and Online & Partnerships. The company is headquartered domestically in Baltimore, but focuses on building its education business outside the U.S.

Sales have declined by an average of 8% per year over the last three years and they were down by 1% in the third quarter.

Because the company has been losing money, the return on equity is -0.24%. The profit margin is at 3.8% and both of these figures are well below average.

When we add up the declining sales and the below average management efficiency measurements, we get a poor SMR rating from Tickeron. Laureate's rating is a 94 and that indicates weak sales and an unprofitable business model. SMR (Sales, Margin, Return on Equity) rating is based on comparative analysis of weighted Sales, Income Margin and Return on Equity values compared against S&P 500 index constituents. The best score a company can get is 1 and the worst score is 100.

As low as the SMR rating is, the Profit vs. Risk Rating is even worse at 100. This indicates that the returns do not compensate for the risks. Laureate’s unstable profits reported over time resulted in significant drawdowns within these last five years. A stable profit reduces stock drawdown and volatility. The average Profit vs. Risk Rating for the industry is 77, placing this stock worse than average.

The one area where Laureate ranks above average is the PE Growth Rating. The company scores a 5 on this rating scale and that indicates outstanding earnings growth. The PE Growth rating is based on a comparative analysis of stock PE ratio increase over the last 12 months compared against S&P 500 index constituents. A rating of 1 indicates highest PE growth while a rating of 100 indicates lowest PE growth.

Looking at the daily chart for Laureate, it looks like the stock could be forming a head and shoulders pattern. The left shoulder was formed at the $17 level in June, the left side of the neck was formed at $15 in late June, and the head comes from the $18.50 high in September. The right side of the neck is down near the $15 area in October, and now the right shoulder could be forming at $17. If this is accurate, the stock will drop back down to $15 and then break lower. 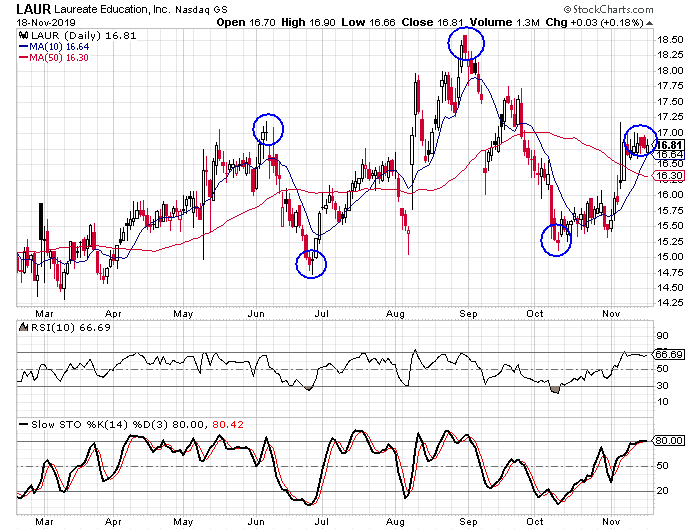 Turning our attention to the sentiment toward Laureate, it doesn't have a great deal of analysts following it. There are only eight analysts covering the stock with seven "buy" ratings and one "hold" rating. This puts the buy percentage at 87.5% which is higher than the average stock. Of course it loses some of its importance because there is so little coverage.

The short interest ratio is higher than average at 4.62. The ratio had been holding in the 1.0 to 2.0 range for several months, but it jumped from 1.61 to 2.64 to 4.62 in the last three reporting periods. The jump has been caused by an increase in the number of shares sold short and a decline in the average daily trading volume.