Tech giant Cisco Systems (Nasdaq: CSCO) reported earnings after the closing bell back on August 14. The company beat EPS estimates and revenue estimates, but it issued soft guidance. The company cited the ongoing trade war as the reason for the softer guidance and investors weren’t happy about that. The stock dropped 8.6% on August 15.

Looking at the weekly chart for Cisco we see a couple of important factors are coming in to play. First, the stock dropped below its 52-week moving average and this is only the second time in the last two years the stock has been below the 52-week. It was below the moving average for a brief period at the end of December and beginning of January, but the stock rallied from there. 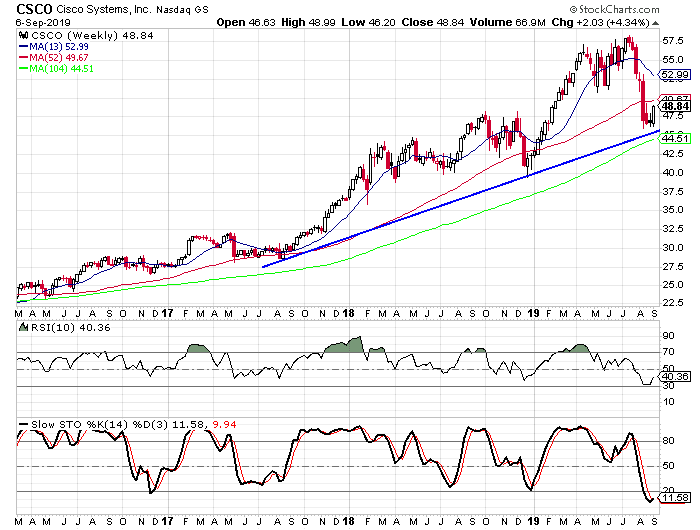 The second factor that jumps out from the chart is the location of the weekly stochastic readings. The indicators are in oversold territory and they are at their lowest level for the last three and a half years. More importantly, the indicators just made a bullish crossover and that could be a good sign for the stock. Looking at the other bullish crossovers from the past few years, each one appears to have been a good time to buy.

Looking at the 10-week RSI we see that it was at its lowest level for the last three and a half years as well. This indicator has also turned higher and that could mean that the stock is shifting from a downward trend to an upward trend.

The Tickeron Technical Analysis Overview looks at the daily indicators and several of them are pointing toward a bullish move as well.

The daily stochastic indicator suggests the ticker price trend may be in a reversal from a downward trend to an upward trend. In 28 of 47 cases where Cisco's stochastic indicator exited the oversold zone it resulted in an increase in price. Tickeron's analysis proposes that the odds of a continued uptrend are 60%.

The RSI Indicator points to a transition from a downtrend to an uptrend -- in cases where Cisco's RSI indicator exited the oversold zone, 7 of 12 resulted in an increase in price. Tickeron's analysis proposes that the odds of a continued uptrend are 58%.

The lower Bollinger Band was broken -- a price increase is expected as the ticker heads toward the middle band, which indicates a buy or call consideration for traders. In 21 of 37 cases where Cisco's price broke its lower Bollinger Band, its price rose further in the following month. The odds of a continued uptrend are 57%.

The company’s management efficiency measurements are really strong with a return on equity of 35.9% and a profit margin of 32.6%. The Tickeron SMR rating for this company is 19, indicating very strong sales and a profitable business model. SMR (Sales, Margin, Return on Equity) rating is based on comparative analysis of weighted Sales, Income Margin and Return on Equity values compared against S&P 500 index constituents.

The sentiment toward Cisco has been changing over the last few months. There are 27 analysts following the stock at this time and 17 have the stock rated as a “buy” while 10 rate the company as a “hold”. Two months ago there were 20”buy” ratings and seven “hold” ratings.