The company got my attention for a couple of reasons recently and both of them point to a possible rally in the stock. First, I received a bullish signal on Restaurant Brands on September 30 as the daily stochastic readings made a bullish crossover. Secondly, I noticed that the short interest on the stock jumped sharply in the first half of September.

Let’s look at the chart first. We see on the daily chart that the stock was trending higher after gapping up in January. There were a few dips along the way, but the pullback in the past month has been the most severe. The selling brought the 10-day RSI down close to oversold territory before it turned a little higher and the stochastic readings reached oversold territory before making the aforementioned bullish crossover. 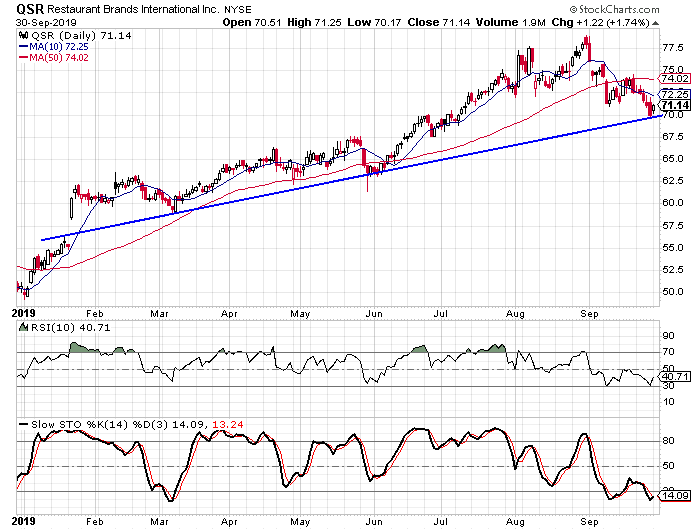 I found the trend line to be particularly interesting as it touched the pre-gap high from January as well as the low in March. The low at the end of May/beginning of June also touches the trend line and now this recent dip hits it yet again.

From a contrarian perspective, the big jump in short interest and the high short interest ratio are both good signs. For the stock to maintain its upward trend while so much selling pressure has been applied is incredible. Secondly, if the stock resumes its upward trend, the short sellers may have to close their positions and that can add tremendous buying pressure to the stock.

As for the fundamentals for Restaurant Brands, the Tickeron SMR rating is 25, indicating very strong sales and a profitable business model. SMR (Sales, Margin, Return on Equity) rating is based on comparative analysis of weighted Sales, Income Margin and Return on Equity values compared against S&P 500 index constituents.

The Tickeron PE Growth Rating for the stock is 29 and that indicates outstanding earnings growth. The PE Growth rating is based on a comparative analysis of stock PE ratio increase over the last 12 months compared against S&P 500 index constituents.