T-Mobile U.S. (Nasdaq: TMUS) has been in the news a lot lately. First it was the approval of its merger with Sprint that made the news and now it’s the fact that the CEO John Legere won't be leaving to assume the role as CEO of WeWork. While the company has gotten attention for these news stories, it got my attention on Friday because my own scans generated a bullish signal on the stock.

From a fundamental perspective, T-Mobile has been above average in some areas and just average in other areas. Earnings growth is one area where the company has been above average. The company has seen earnings grow by an average of 37% per year over the last three years and earnings increased by 51% in the third quarter. Analysts expect earnings for 2019 as a whole to increase by 28%.

Sales have grown as well, but not nearly as much as earnings. Sales were only up 2% in the third quarter and have averaged growth of 7% per year over the last three years. The management efficiency ratings are slightly below average with a return on equity of 11.3% and a profit margin of 8.2%.

The Tickeron PE Growth Rating is also well above average with a reading of 18, pointing to outstanding earnings growth. The PE Growth rating is based on a comparative analysis of stock PE ratio increase over the last 12 months compared against S&P 500 index constituents. A rating of 1 indicates highest PE growth while a rating of 100 indicates lowest PE growth.

Because of the below average management efficiency readings, the Tickeron SMR rating is average at 47, indicating strong sales and a profitable business model. SMR (Sales, Margin, Return on Equity) rating is based on comparative analysis of weighted Sales, Income Margin and Return on Equity values compared against S&P 500 index constituents.

Turning our attention to the chart, we see that the stock has been trending higher over the last year with a trend channel defining the different cycles within the overall trend for the last 10 months. 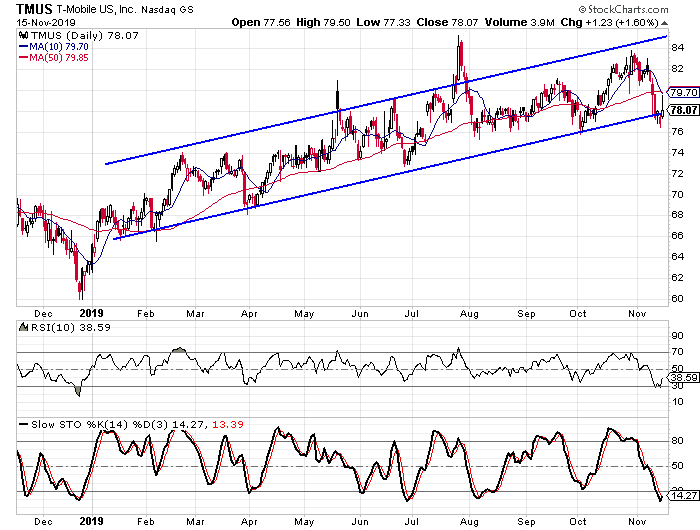 The stock has jumped above the upper rail on a few occasions, but with the various news stories, that isn't all that surprising.

One indicator that has been pretty reliable has been the stochastic readings. When they have dropped below the 30 level and then made a bullish crossover, the stock has rallied every time. The extent of the rallies has varied some though.

Looking at the sentiment toward T-Mobile, there are 19 analysts covering the stock with 14 "buy" ratings and five "hold" ratings. This puts the buy percentage at 73.7% and that is in the average range.

The short interest ratio is at 4.19 and has bounced around quite a bit in the last six months. The current reading is above average compared to other stocks, but the ratio has been as high as 6.93 in the last few months and as low as 1.06. The wide range in the ratio has been affected mostly by the average daily trading volume and not by the number of shares sold short.