The sea is not calm for Norwegian Cruise Line

Over the last three and a half months, Norwegian Cruise Line Holdings (NYSE: NCLH) has been struggling a bit, or at least its stock has. After peaking in early May, the stock has underperformed the overall market and a trend channel has formed that defines the various cycles within the overall trend. The stock hit the upper rail of the channel on August 13 before turning lower the next day. The downward momentum has been strong enough that the 50-day moving average crossed bearishly below the 200-day in early August. 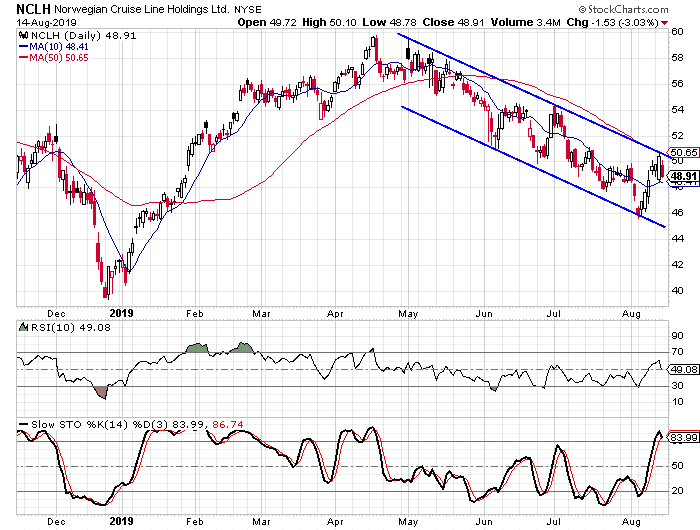 We see on the chart that the upper rail connects the highs from May, July 1, and now August 13. It is also worth noting that the 50-day moving average and the upper rail are right on top of one another. This could provide a dual layer of resistance that the stock has to break through in order to move higher.

The daily stochastic readings are in overbought territory at this time and they performed a bearish crossover on August 14. In addition to this potential bearish sign, the Tickeron Trend Prediction Engine generated a bearish signal on Norwegian Cruise Line on August 13. The signal calls for a decline of at least 4% within the next month. It showed a confidence level of 89% and past predictions on the stock have been accurate 70% of the time. 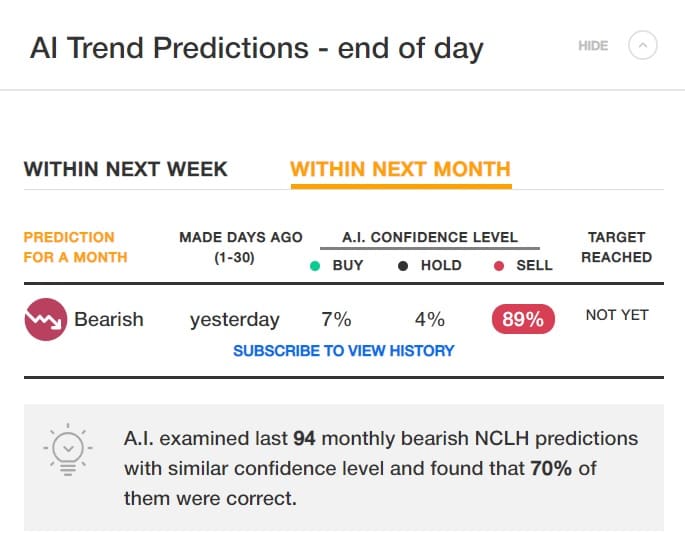 Turning our attention to the fundamentals for Norwegian Cruise Line, the company seems to be average in most categories, but there are a few that are below average. The Tickeron SMR rating for this company is 61, indicating slightly weaker than average sales and a marginally profitable business model. SMR (Sales, Margin, Return on Equity) rating is based on comparative analysis of weighted Sales, Income Margin and Return on Equity values compared against S&P 500 index constituents. The weighted SMR value is a proprietary formula developed by Tickeron and represents an overall profitability measure for a stock.

That SMR rating is mostly being impacted by the sales growth rate as much as anything. The company has seen sales grow at a rate of 11% per year over the last three years and they grew by 9% in the most recent quarterly report. The return on equity is at 18.9% right now and the profit margin is at 18.5%.

Earnings have been growing at a solid pace over the last three years, but have slowed a little recently and are expected to slow this year. The average annual growth rate has been 20%, but the most recent quarterly report showed earnings growth of only 7%. Analysts expect earnings to grow at a much more modest 4% for 2019 as a whole.

Despite what seems to be a shift in the fundamentals and the downward trend on the chart, the sentiment toward Norwegian Cruise Line is extremely bullish. There are 18 analysts following the stock at this time and 16 of them have the stock rated as a “buy” and two have it rated as a “hold”. This puts the overall buy percentage at 88.9% and that is above the average buy rating.

The short interest ratio for the stock is currently at 2.6 and that is below the average short interest ratio. The number of shares sold short dropped from 6.28 million to 6.09 million from the mid-July reading to the end of July. This is a sign that the sentiment became more bullish during that stretch.

While the fundamentals for Norwegian Cruise Line aren’t terrible, the momentum on the chart is to the downside and the sentiment being skewed to the optimistic side won’t help the stock if it continues to fall.