Internet stocks, especially those in the communication services area, have come under some selling pressure in the last few weeks. The stocks fell after the events in Washington on January 6. The riots led to a ban of former President Trump from several platforms and that caused Twitter (TWTR) and other stocks to fall.

Thanks to the selling, Tickeron’s AI Trend Prediction tool generated bullish signals on Twitter and two other internet companies on January 19. Looking at the fundamental and technical screeners for the three stocks, the signals are definitely being driven by the technical indicators.

The other two companies that received bullish signals are Farfetch (FTCH) and Snap (SNAP). The bullish predictions all three showed a confidence level of 88% for the stocks to move higher by at least 4% over the next month.

None of the three stocks do very well on the fundamentals with Farfetch and Snap both getting five negative ratings and no positive ratings. Twitter gets one positive rating and the rest are neutral.

The areas where Farfetch and Snap receive the negative ratings are the same across the board with the worst ratings coming from the Profit vs Risk ratings, the P/E Growth Ratings, and the SMR Ratings. The one area where Twitter gets a positive score is the Seasonality Rating.

Looking at the daily charts for the three stocks, the most clear cut pattern for the three was on Twitter. If we connect the lows from March, June, and October, we get a trend line that connects nicely to where the stock appears to have found support this week. The stock did dip slightly below the trend line before turning higher. 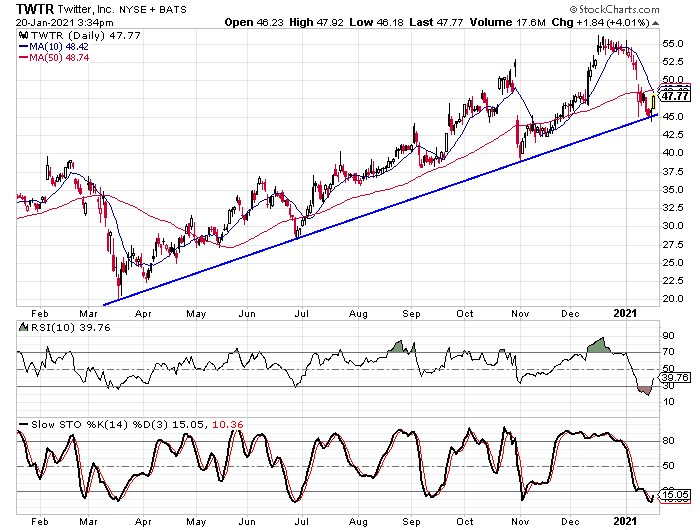 We also see on the daily chart that the daily stochastic indicators are making a bullish crossover and that the 10-day RSI just reversed higher and moved out of oversold territory.

The complete analysis for the three stocks appears below. You can see the exact scores the stocks get in each category and how they rank compared to one another.