Santa Clara-based Palo Alto Networks (NYSE: PANW) reported earnings on September 4. The software security firm beat both earnings and revenue estimates for the fiscal fourth quarter, but the forward guidance was a little below analysts’ estimates. The overall reaction from investors was a positive one as the stock jumped when it opened for trading on September 5.

Looking at the weekly chart for Palo Alto, we see that the stock was trading just above its 104-week (two years of data) moving average and just above a trend line that connects the lows from the last three years. The bounce after the earnings report allowed the two support levels to remain in place as the stock moved back above its 52-week moving average. 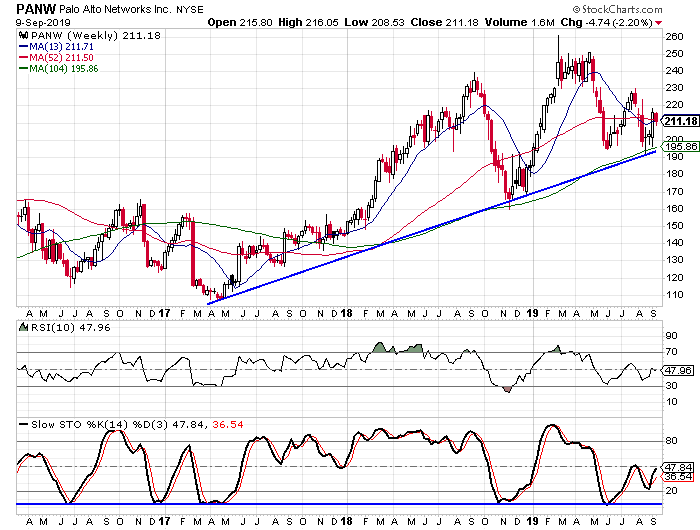 The weekly overbought/oversold indicators had dropped down in the four weeks heading in to the earnings report, but they hadn’t reached oversold territory. Over the last three and a half years, the 10-week RSI has only been in oversold territory on two occasions. The weekly stochastic readings have been there five times in the same time period.

Tickeron’s Technical Analysis overview shows several additional bullish signs for Palo Alto and those indications are based on the daily indicators. The stochastic indicators made a bullish crossover and that suggests the stock may be in a reversal from a downtrend to an uptrend. In 38 of 50 cases where Palo Alto's stochastic indicator exited the oversold zone resulted in an increase in price. Tickeron's analysis proposes that the odds of a continued uptrend are 76%.

Following a 3-day advance, the price is estimated to grow further. Considering data from situations where Palo Alto advanced for three days, in 261 of 356 cases, the price rose further within the following month. The odds of a continued uptrend are 73%.

The RSI Indicator points to a transition from a downtrend to an uptrend -- in cases where Palo Alto's RSI indicator exited the oversold zone, 10 of 14 resulted in an increase in price. Tickeron's analysis proposes that the odds of a continued Uptrend are 71%.

In addition to the strong earnings and sales growth, the company’s management efficiency measurements are well above average as well. The company boasts a return on equity of 42.3% and the profit margin is at 23.1%.

Sentiment toward Palo Alto is mixed at this time. Analysts are pretty bullish on the stock with 30 out of 35 analysts rating the stock as a “buy”. There are four “hold” ratings and one “sell” rating. This puts the buy percentage at 85.7% and that is well above average.

The short interest ratio is at 4.3 currently and that is slightly above average. I wrote about Palo Alto back in November ahead of another earnings report and the short interest ratio back then was at 2.8. This means that pessimism toward the stock is higher than the average stock and investors have been getting more bearish over the last nine months.

The put/call ratio for Palo Alto was at 1.35 ahead of the earnings report and that is higher than the average stock and is indicative of pessimism. There were 42,170 puts open at the time and 31,241 calls open.

With the combination of solid fundamentals, an upward trend on the stock, and an overall bearish sentiment from short sellers and option traders, Palo Alto looks poised to continue its upward trend.