The next earnings season is right around the corner. Over the next four weeks or so we will get earnings reports from well over half of the companies in the S&P 500. One company that will be reporting is VeriSign (Nasdaq: VRSN), the internet registry and infrastructure firm. The company is scheduled to release third quarter earnings results on October 24.

Before the company gets to that earnings release, the stock is facing some key support at its 52-week moving average. The stock hasn’t closed a week below that trend line since early 2017. Over the last two weeks the stock has dipped below the 52-week, but it hasn’t closed below it yet. 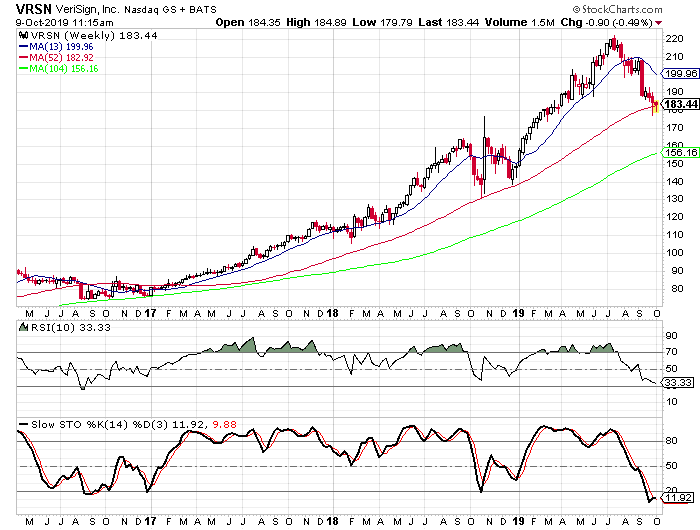 We see that the weekly stochastic readings are in oversold territory and at their lowest levels in the last three and a half years. The indicators did make a bullish crossover recently and such moves have been a good sign for the stock in the past.

The 10-week RSI isn’t in oversold territory yet, but it is at its lowest point since August of 2016.

Looking at some of the daily indicators, the 10-day RSI exited the oversold zone last week and that indicates that VeriSign price is in a transition from a downtrend to an uptrend. According to Tickeron, in 5 of 6 cases where the RSI Indicator exited the oversold zone, the price rose further within the following month. The odds of a continued uptrend are 83%.

We also see that the lower Bollinger Band was broken last week and that suggests a price increase is expected as the ticker heads toward the middle band. The Tickeron Technical Analysis Overview points out that in 21 of 33 cases where VeriSign's price broke its lower Bollinger Band, its price rose further in the following month. The odds of a continued uptrend are 64%.

As for the sentiment toward VeriSign, we see a bit of mixed picture. There are only four analysts covering the stock which I find to be extremely low for a company that has been around since 1995 and trades over 600,000 shares a day on average. As for the ratings, there is one “buy” rating, two “hold” ratings, and one “sell” rating. This leaves plenty of room for additional coverage and upgrades.

The short interest ratio is currently at 1.79 and that is on the low side. The low ratio indicates a certain degree of optimism for the stock ahead of the earnings report.