Why ‘Head-and-Shoulders’ Patterns Form...and How to Trade Them

Technical investors will tell you that one of the pillars of investing, at least for them, is the art of finding patterns and trends in the markets and using them to trade. There was once a time when traders and analysts pored over hundreds — even thousands — of stock charts every day, looking for patterns and opportunities. Today, the process of manual search is about as useful as a VCR. Now algorithms can do all the work.

One of the most well-recognized patterns for traders is the “Head-and-Shoulders” pattern. The bearish version of it, the “Head-and-Shoulders Top,” forms when a stock is testing new highs on an uptrend, but fails to retest its highest high and break upward. Mounting selling pressure takes over each time a stock approaches its high.

You can see this formation easily in the image below. The pattern forms with a center peak (the Head, labeled 3) and the left and right Shoulders (1,5). 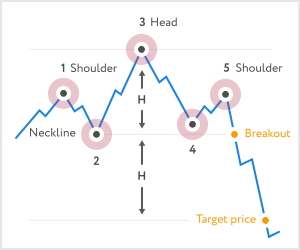 The Geometric Elements of a Head-and-Shoulders Top Pattern

In theory, it makes sense how a Head-and-Shoulders pattern forms. But perhaps the more interesting question is, why does it form?

The Investor Psychology Behind a Head-and-Shoulders Pattern

The theory behind a Head-and-Shoulders formation makes logical sense from a trader’s standpoint. As a security tests a new high that investors believe is the best it can reach, sell orders are placed to take profits off the table (point 1 to point 2 on the chart above). Selling pressure pushes the security back down to an attractive entry point, and fresh capital comes in — driving the price up again to an even higher high (point 2 to point 3). The process repeats itself, but eventually, investors will become convinced that the security won’t break upward. At that point, it becomes a scramble to take profits off the table at the best price possible, which causes a cascade of selling from the Shoulder (5) to the Breakout and eventually down to the Target Price.

Here’s a real-world example of how the Head-and-Shoulders Top Pattern looks. The image below was generated by Tickeron’s Artificial Intelligence, which has the capability of scanning the stock, bond, and cryptocurrency markets in search of patterns. Tickeron’s AI, called the Pattern Search Engine, can help traders find patterns and trading opportunities every day! Here a pattern was found in early December of last year:

To note, while the above example is an actual stock and an actual confirmed and successful head-and-shoulders pattern, it does not constitute investment advice nor is it a recommendation for the stock.

Not only does Tickeron’s AI find new patterns, but it also generates trade ideas for investors to consider — while also providing you a Target Price and a level of confidence that the target price will be reached. If you’re interested in pattern trading and don’t have the time or desire to manually scan the market in search of them, then you should be using algorithms to do the work for you. Armed with patterns, hard data and trade ideas, you can then make an informed decision on how to act.

Working the Other Way: The Head-and-Shoulders Bottom Pattern

The first example talked about the psychology of the bearish Head-and-Shoulders pattern when a security can’t quite break out to the upside. The opposite type of pattern, a “Head-and-Shoulders Bottom,” works the opposite way — a security tests lows, but investors continually see the lows as fresh buying opportunities. Eventually, if the security breaks out to the upside, investors won’t want to be left on the sidelines as the security takes off...so the buying continues.

That’s exactly what we see in the example below, which was also discovered by Tickeron’s Pattern Search Engine: 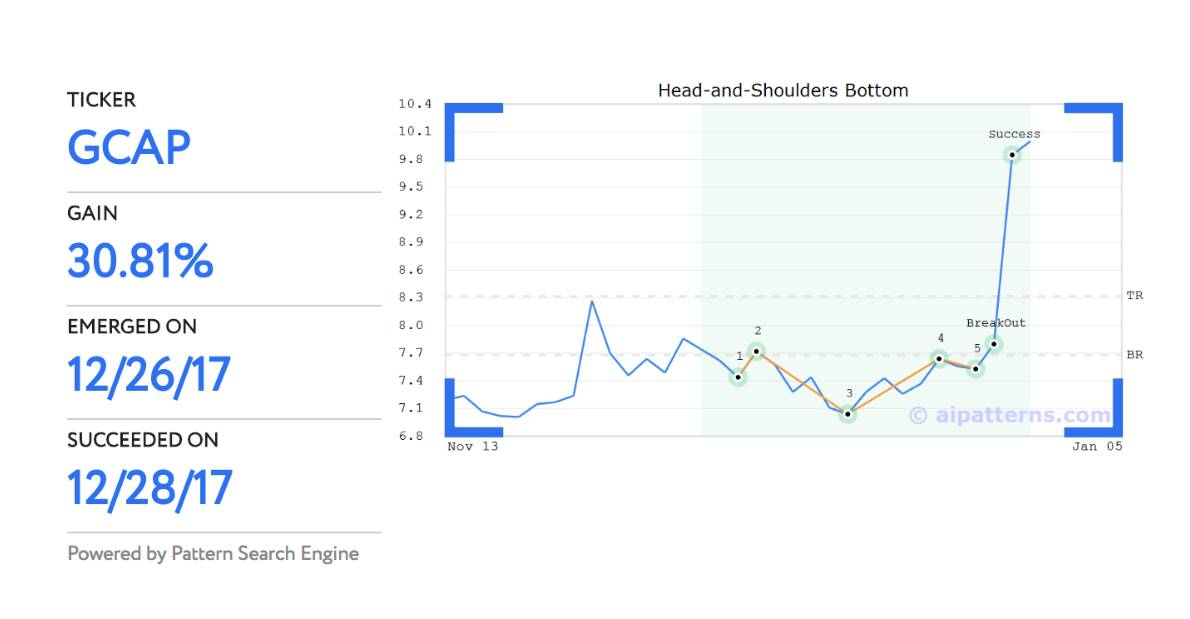 To note, while the above example is an actual stock and an actual confirmed and successful head-and-shoulders pattern, it does not constitute investment advice nor is it a recommendation for the stock.

You can clearly see the Head-and-Shoulders pattern formation, and in this case, the stock really broke out convincingly to the upside. Tickeron’s AI set a high target price for this stock, and the pattern turned out to be a success that would have generated a 30.81% gain for the trader.

Tickeron’s AI maintains statistics for all of the patterns it finds. With just a few clicks, a Tickeron user can obtain the following statistics about the Pattern Search Engine:

Example #2: For the Head-and-Shoulders Top (Bearish) Pattern, we looked at instances where Tickeron’s AI had at least 20% confidence the security would reach its target price, but this time we looked for patterns where the distance to target price was at least 10%. Here are the statistics:

Test the Pattern Search Engine for Yourself