So far the year 2020 has been one of extremes for retailers. Some companies are doing great and we have seen a great number of bankruptcies as well. Since the COVID-19 pandemic started we have seen some stores do well and others have floundered.

One item that has been a major factor seems to be whether the company has a strong online presence or not. But I found a direct link between the gains in the stocks and what type of stores the company operates.

Looking at the Tickeron Screener and the scorecard for nine different retailers, we see the one-year returns for the stocks have varied greatly. All nine of these companies will report earnings during the week of August 17 through 21 and that’s the reason I have grouped them together. We see home improvement retailers Lowes (LOW) and Home Depot (HD) are in the top spot and the third place spot with gains of 69.7% and 43.3%, respectively. Target (TGT) is in the number two spot with a gain of 68.8%. 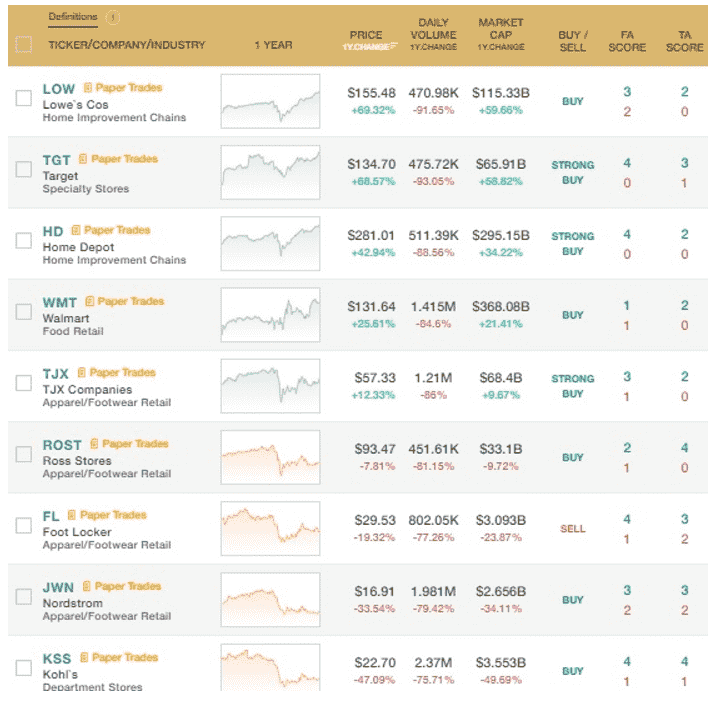 If we look at the stores at the top of the list, sure two of them are home improvement retailers, but the top four all operate as stand-alone stores. They aren’t in strip malls or traditional malls—they have standalone buildings. Now look at the bottom five. Foot Locker and Nordstrom stores are typically found in traditional malls. Kohl’s, Ross Stores (ROST), and TJX Companies (TJX) all typically have their stores in strip malls or in smaller shopping centers where they are considered an anchor store.

I thought this was a fascinating development and I think it is more than just a coincidence. Yes, the stocks at the top of the list also seem to have pretty strong online operations, but so does Kohl’s. What I really think is going on with the stocks is that they reflect the trend that has been going on for a number of years where the big, enclosed, traditional shopping malls are struggling. We have seen Neiman Marcus, Lord & Taylor, JC Penney, and Brooks Brothers declare bankruptcy. Just this week Stein Mart became the latest retailer to file for bankruptcy.

Many of the companies that have declared bankruptcy in the retail space serve as anchor stores for traditional malls or for strip malls. Many of these stores were struggling before the pandemic. The economic shutdowns that have taken place didn’t cause their troubles, but the shutdowns did accelerate their demise.

Unfortunately there is likely to be a snowball effect as the anchor stores leave, the smaller retailers will struggle as well and it will likely lead to more bankruptcies.

Getting back to the upcoming earnings reports and the image from the Tickeron Screener, the group as a whole has a short-term positive outlook. There are three “strong buy” ratings, five “buy” ratings, and only one “sell” rating (Foot Locker). The overall fundamental ratings aren’t nearly as bad as I would have expected. All nine stocks have more bullish indicators than bearish indicators and that was shocking to me. 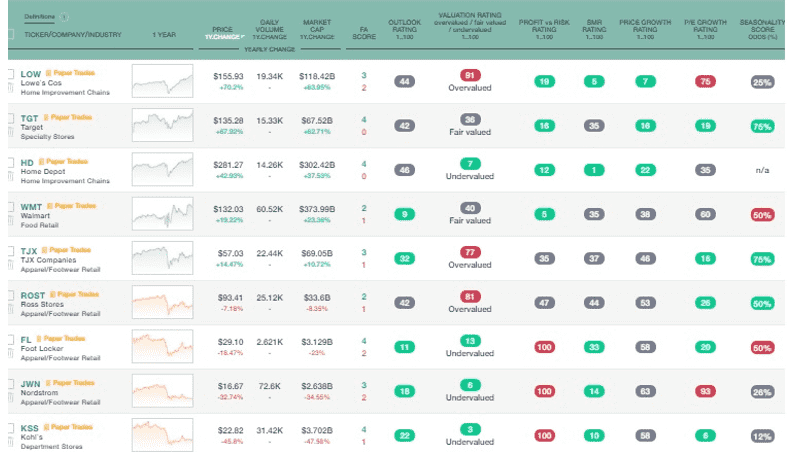 The two biggest areas of concern are in the Valuation Rating and the Profit vs. Risk Ratings. Each of those categories shows three stocks with bearish signals in that column.

The technical picture is even stronger than the fundamental picture. There are only six bearish signals across the whole board and three of those are for Foot Locker—thus the “sell” rating on the scorecard. 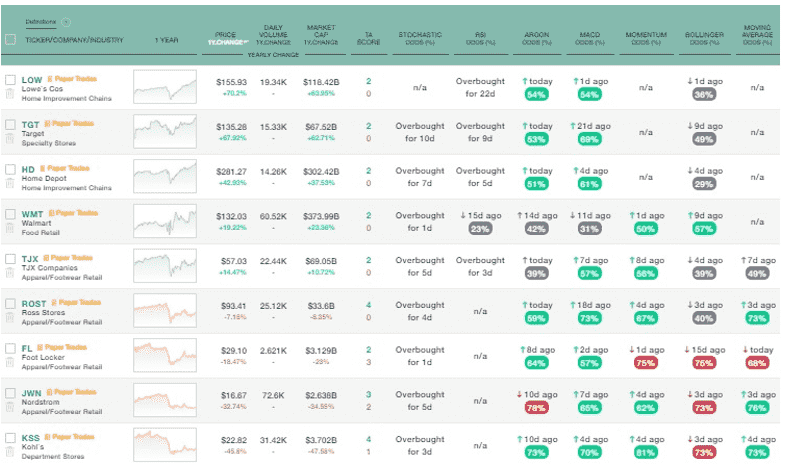 The AROON Indicators and the MACD Indicators are both showing a number of bullish signals for the group.

Continuing with the standalone concept versus the mall and shopping center stores, the EPS estimates for the coming reports seem to follow my line of thinking. We see Lowes and Home Depot are expected to see earnings growth while Target and Wal Mart are expected to see small declines in earnings, but remain profitable. 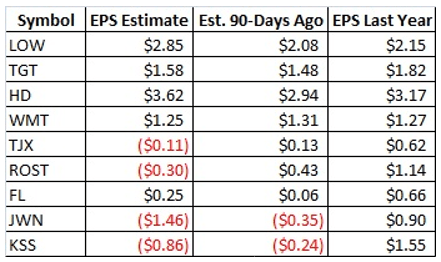 Four of the five mall and shopping center oriented companies are expected to lose money in the quarter and all five reported profits in the same period last year. Foot Locker is the exception again as it is expected to earn $0.25, but that is considerably lower than the $0.66 the company earned last year.