Few industries have outperformed aluminum over the last three months. This past week President Trump announced that he would reinstate a 10% tariff on Canadian aluminum that enters the United States. That announcement could have disrupted the rally in some aluminum stocks, but that doesn’t seem to be the case.

The Tickeron aluminum industry group has six stocks in it. It features companies like Alcoa Corp (NYSE:AA) and Arconic Corporation (NYSE: ARNC). Aluminum is widely used in industries like construction, packaging, and the automotive sector.

Aluminum has seen an increase in demand from the automotive industry because it helps improve fuel efficiency. The U.S. aluminum industry generates nearly $71 billion a year in direct economic impact according to The Aluminum Association.

Looking at the six stocks included in the group, Tickeron has a positive outlook on this group and predicts a further increase by more than 4.00% within the next month with a likelihood of 57%. There is one stock rated as a “strong buy”, four are rated as a “buy”, and one is rated as a “sell”. Arconic is ranked the highest as the strong buy. 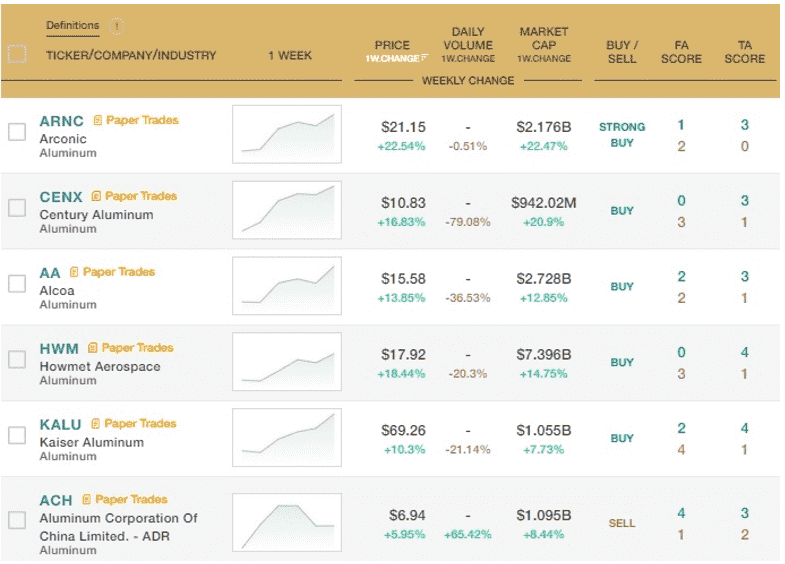 The lone “sell” in the group is Aluminum Corporation of China (NYSE: ACH). Ironically, the company has the best fundamental ratings of any stock in the group, but the scorecard is more short-term in nature and sees the stock struggling in the coming days.

None of the other companies do very well in the fundamental categories. One area in particular that is worrisome is the Profit Vs. Risk Rating. Four of the companies get the worst possible score of 100 and the other two have scores of 98 and 96. Those are extremely high and are likely the result of the big run up in the stocks over the last three months.

Even the few analysts that are covering these stocks aren’t very bullish on them. There are a total of 24 analysts’ ratings on these stocks with only seven “buy” ratings. There are 16 “hold” ratings and there is one “sell” rating. If we look at the collective ratings, only 29.2% of them are buy ratings. That is woefully low considering the buy percentage for the average stock is between 65% and 75%.

What this information suggests to me, based on a contrarian line of analysis, is that we could see aluminum stocks continue to rally. There is very little chance of massive downgrades since the ratings are so low already. If anything we are likely to see an increase in coverage for the group and potentially upgrades. The odds of seeing upgrades is certainly higher than the odds of downgrades.