Pharmaceutical manufacturer Astrazeneca (NYSE: AZN) has been trending higher over the last three and a half months and a trend channel has formed that defines the various cycles within the overall trend. The stock bounced off of the lower rail of that channel earlier this week and now the stock looks poised to move higher in the coming weeks. 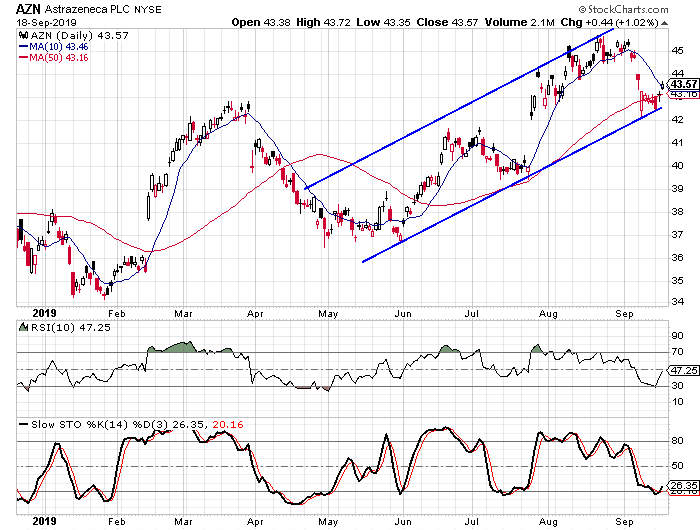 The 5o-day moving average is just above the lower rail and that gives the stock two layers of support to help it. We also see on the chart that the daily stochastic readings were flirting with oversold territory before making a bullish crossover on September 18. Similar developments in July and May were really good buy signals for the stock.

Over the past year, Astrazeneca’s relative strength rating from Investor’s Business Daily is a 74, meaning that the stock is in the top 26% of all companies in IBD’s database from a price appreciation perspective.

In addition to the technical indicators that are pointing toward an upside move for Astrazeneca, there are a number of fundamental indicators that are really positive for the stock. First, the company boasts a return on equity of 28.5% and a profit margin of 27.4%. Both of these figures are well above average. These two indicators are contributing factors as to why the company gets an SMR rating of 17 from Tickeron. This indicates that the company has very strong sales and a profitable business model. SMR (Sales, Margin, Return on Equity) rating is based on comparative analysis of weighted Sales, Income Margin and Return on Equity values compared against S&P 500 index constituents.

The Tickeron PE Growth Rating for Astrazeneca is 21, pointing to outstanding earnings growth. The PE Growth rating is based on a comparative analysis of stock PE ratio increase over the last 12 months compared against S&P 500 index constituents. A rating of 1 indicates highest PE growth while a rating of 100 indicates lowest PE growth.

As well as the company and the stock have performed over the past year, the sentiment toward Astrazeneca is anything but overly bullish. According to the Wall Street Journal, there are 24 analysts covering the stock at this time and 16 have it rated as a “buy”. There are five “hold” ratings and three “sell” ratings. This puts the buy percentage at 66.7%. This is in the lower portion of the average range. The average buy percentage is in the 65% to 75% range.

The short interest ratio is higher than average at 5.4 and that is surprising for a company like Astrazeneca. The number of shares sold short increased from 15.47 million shares to 16.32 million during the second half of August and that suggest the bearish sentiment is growing.