Chinese internet firm Baozun (Nasdaq: BZUN) reported earnings on August 21. The company reported earnings of $0.20 on revenue of $248.2 million. Both of those figures were better than the consensus estimates and both were better than the results from a year ago. Despite beating on both the top and bottom line and seeing year over year increases in earnings and revenues, the stock fell sharply. In fact the stock dropped 12.6% on August 21.

This was a little puzzling to me and I started looking back at the last couple of earnings reports. That’s when I noticed a pattern. When the company reported earnings on March 6, it beat earnings estimates and revenue estimates, but the stock fell 17.7% from the close on March 5 to the low on March 8. The stock would turn things around and rally by over 50% within the next two months. 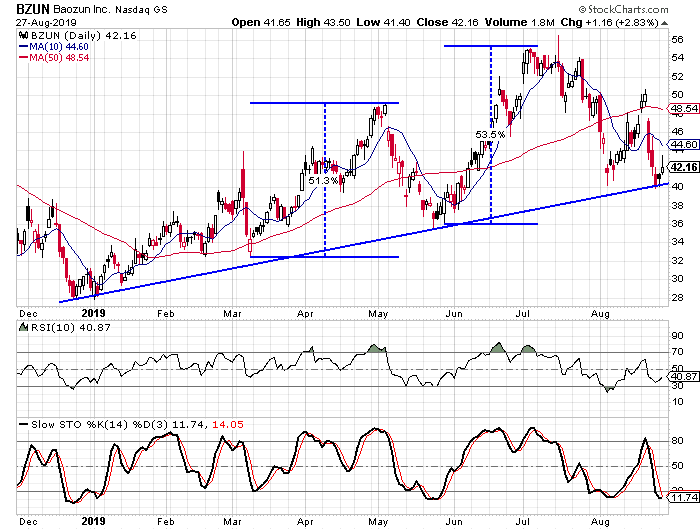 The company reported earnings again on May 29 and once again it beat estimates on both the top and bottom line. The stock didn’t drop this time around, but it also didn’t gap higher. The stock would rally by over 50% in just over a month.

I also took note of a trend line connecting the December low with the low from May and the stock just hit this trend line late last week—two days after its earnings report.

Looking at the Tickeron Technical Analysis Overview for Baozun we see that the stochastic indicators were in the oversold zone for 3 days. The price of this ticker is presumed to bounce back soon, since the longer the ticker stays in the oversold zone, the more promptly an uptrend is expected. The indicators haven’t made a bullish crossover just yet, but they look like they could soon.

The RSI indicator points to a transition from a downtrend to an uptrend -- in cases where BZUN's RSI indicator exited the oversold zone, 9 of 10 resulted in an increase in price. Tickeron's analysis proposes that the odds of a continued uptrend are 90%.

Yet another positive sign for Baozun is the fact that the lower Bollinger Band was broken. In 24 of 30 cases where the stock’s price broke its lower Bollinger Band, it rose further in the following month. The odds of a continued upward trend are 80%.

On the fundamental side we see that the Tickeron SMR rating for this company is 32, indicating very strong sales and a profitable business model. SMR (Sales, Margin, Return on Equity) rating is based on comparative analysis of weighted Sales, Income Margin and Return on Equity values compared against S&P 500 index constituents.

The company saw sales increase by 42% in the second quarter and it has averaged sales growth of 26% over the last three years. Analysts expect sales to grow by 30.9% for 2019 as a whole. The return on equity is at 17.2% while the profit margin is a little below average at 7.7%.

Earnings have grown by an average of 79% per year over the last three years and they were up by 50% in the second quarter. Analysts’ estimates are suggesting earnings growth of 43% for 2019.

The sentiment toward Baozun is mixed with analysts being rather bullish on the stock while short sellers are extremely bearish on the stock. There are 12 analysts following the stock with 10 “buy” ratings and two “hold” ratings. That puts the buy percentage at 83.3% and that is above the range of 65% to 75%.

Given the strong fundamentals and the huge short interest ratio, those two scenarios alone make me think it’s time for Baozun to bounce. When you add the pattern where the stock has gained over 50% after the last two earnings reports and it has done it in less than two months—that is icing on the cake to me.