Zoetis (NYSE: ZTS) is a somewhat unique company in that it makes pharmaceuticals for animals. The New Jersey-based company makes drugs for all different animal species from dogs and cats to cows and horses. The company has performed extremely well in recent years, both fundamentally and in its price performance.

Zoetis just saw a bullish signal generated by the Tickeron Trend Prediction Engine on September 15. The signal calls for a gain of at least 4% within the next month and it% showed a confidence level of 74%. Past predictions for Zoetis have been successful 76% of the time. 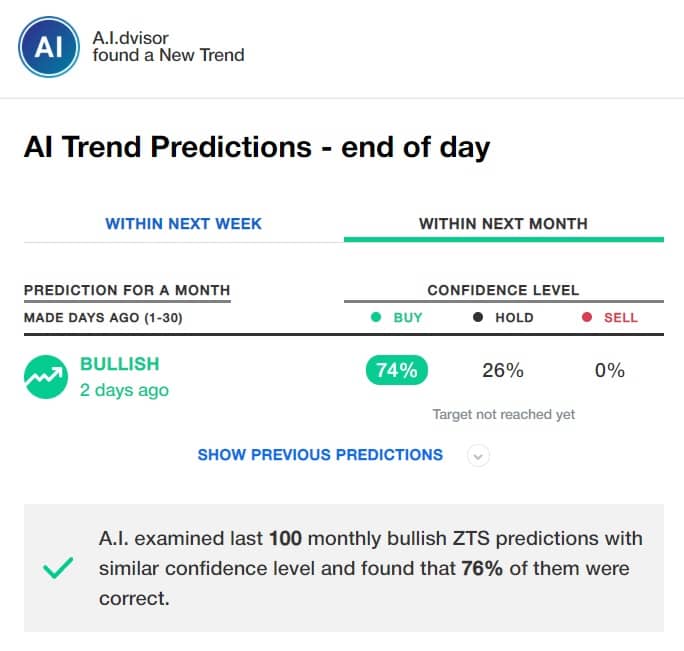 Looking at the daily chart for the stock we see that the stock has been trending higher since December and a trend channel has formed to define the various cycles within the overall upward trend. The stock just bounced off the lower rail of the channel this week and it looks poised to move higher yet again. 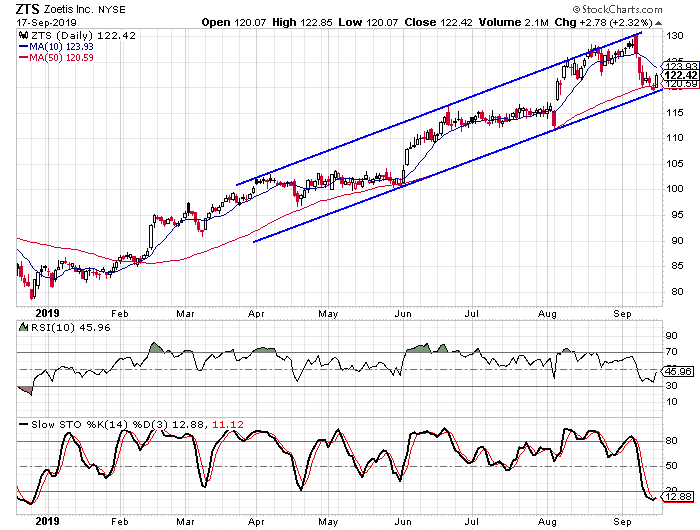 Two other things that stand out on the chart are the 50-day moving average and the stochastic readings. The 5o-day is just above the lower rail of the channel and that gives the stock two potential support levels. The stochastic readings reached oversold territory last week and made a bullish crossover on September 17.

The bullish signal from Tickeron and the bullish stochastic crossover are both good signs for the stock, but there is even more evidence pointing to a move higher. The Tickeron Technical Analysis Overview shows that the lower Bollinger Band was broken on September 10. This price move signals that Zoetis may jump back above the lower band and head toward the middle band. In 29 of 42 cases where the stock price broke its lower Bollinger Band, its price rose further in the following month. The odds of a continued uptrend are 69%.

I mentioned earlier that the company has performed well from a fundamental perspective. At present the company boasts a return on equity of 77.1% and a profit margin of 32.1%. Both of those figures are excellent and well above average.

Zoetis has seen its earnings grow by an average of 25% per year over the last three years and they grew by 17% in the most recent quarterly report. Analysts expect earnings to grow by 14% in 2019 as a whole.

The Tickeron SMR rating for this company is 8, indicating very strong sales and a profitable business model. SMR (Sales, Margin, Return on Equity) rating is based on comparative analysis of weighted Sales, Income Margin and Return on Equity values compared against S&P 500 index constituents.

Sentiment toward Zoetis is average. There are 16 analysts covering the stock with 10 “buy” ratings, five “hold” ratings, and one “sell” rating. This puts the buy percentage at 62.5% and that is slightly below average, or slightly skewed toward the bearish side.

The short interest ratio is currently at 2.0 and that is also slightly below average, but that indicates a slight bullish skew.

Overall we see strong fundamentals, bullish signals from three different sources, and sentiment that is average. I would say thinks look pretty good for Zoetis in the coming weeks.