Dow Jones Industrial Average Appears to Be Getting Some Upgrades

On August 24, S&P Dow Jones Indices announced that it was making changes to the makeup of the Dow Jones Industrial Index. Exxon Mobil (XOM), Pfizer (PFE), and Raytheon (RTX) will be removed at the market open on August 31. Amgen (AMGN), Honeywell (HON), and Salesforce.com will be added to the index.

The changes mark the first time since September 2013 that multiple companies have been dropped and added at the same time. Two of the changes seem to be trading out similar companies. Amgen for Pfizer makes sense with both being healthcare companies. Honeywell for Raytheon makes sense since both are industrial companies with ties to the defense industry.

The one that doesn’t make much sense is swapping out Exxon Mobil and replacing it with Salesforce.com. Swapping out an oil company for a cloud-based software company seems a little odd. With the removal of Exxon Mobil, Chevron will be the only energy sector stock left in the index. The index will have six tech sector companies once Salesforce is added.

Looking at the new stocks versus the old stocks through the Tickeron Screener, it appears that the Dow is upgrading to higher rated stocks. On the fundamental side, Amgen scores slightly better than Pfizer with three positive indicators to only one negative indicator. Pfizer has three positive ones and two negative ones.

Honeywell scores considerably better than Raytheon with three bullish indicators and only one negative. Raytheon’s results are exactly the opposite with one bullish and three bearish indicators. 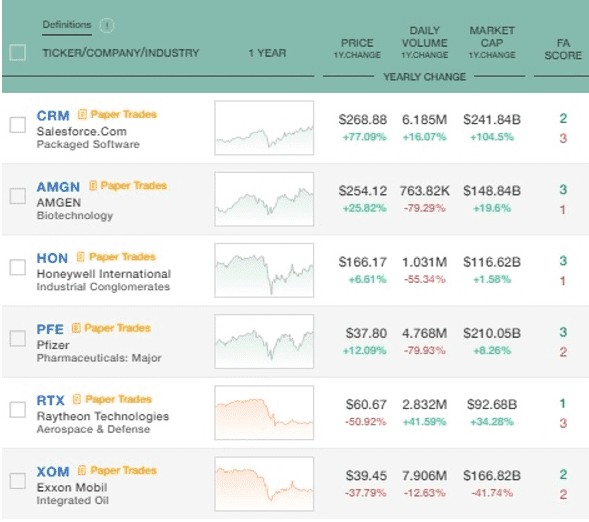 On the technical side of the equation, Salesforce does considerably better with three bullish signals and zero bearish signals. Exxon gets one bullish and one bearish signal at this time. 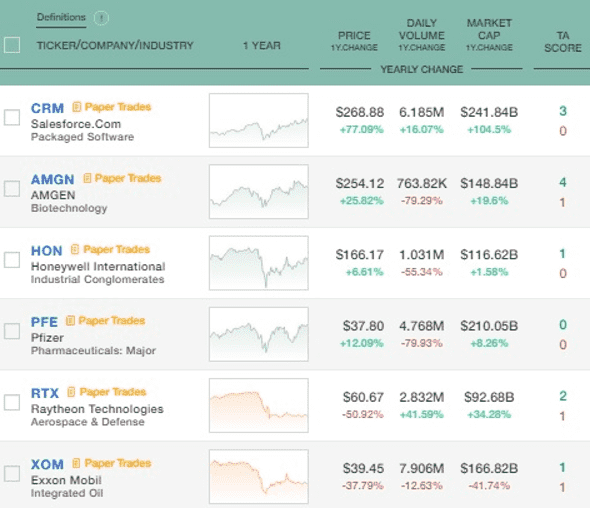 Amgen does well on the technical side as well with four bullish signals to only one bearish signal. Pfizer is completely neutral with no bullish or bearish signals.

Raytheon does a little better on the technical analysis with two bullish signals to only one for Honeywell. Raytheon does have one bearish indicator while Honeywell doesn’t have any bearish signals.

In addition to being curious about how the stocks being removed compared to the stocks being added, I was also curious about the history of component changes. There have been lots of changes since 1929, so I focused on the instances where there multiple changes and the ones that have happened in the last 40 years. My goal was to find out if there was a pattern to how the market reacted after changes were implemented.

I couldn’t find a discernible pattern, but there were two instances where multiple changes were made and then a market correction started within the next six months. On March 12, 1987, Inco Limited and Owens-Illinois were replaced with Boeing and Coca-Cola. Of course on October 19, 1987 the market crashed in one of the worst days in market history.

The second instance occurred on November 1, 1999 and it saw Chevron, Goodyear, Sears, and Union Carbide removed from the index. The additions made at that time were Home Depot, SBC Communications, Intel, and Microsoft. Those last two were the interesting additions, at least to me. These were the first real tech companies that had been added to the index. The Dow would peak in January 2000 and proceed to fall sharply over the next few years before finally reversing in early 2003.

Another interesting note about the upcoming changes is that Honeywell was replaced by Chevron on February 19, 2008. As I mentioned earlier, Chevron will be the lone energy sector representative after the changes on August 31. Honeywell is now moving back in to the index. So Chevron has been removed and moved back in and now Honeywell is moving back in after being removed.