Extremely bullish sentiment could hurt ConocoPhillips as it faces resistance

The price of oil has been trending lower over the last seven months with the price putting in a series of lower highs since peaking at $66.60 in April. The price spiked in September when the attacks occurred on Saudi Aramco's production facilities, but have since fallen back down as the production interruption was minimal. 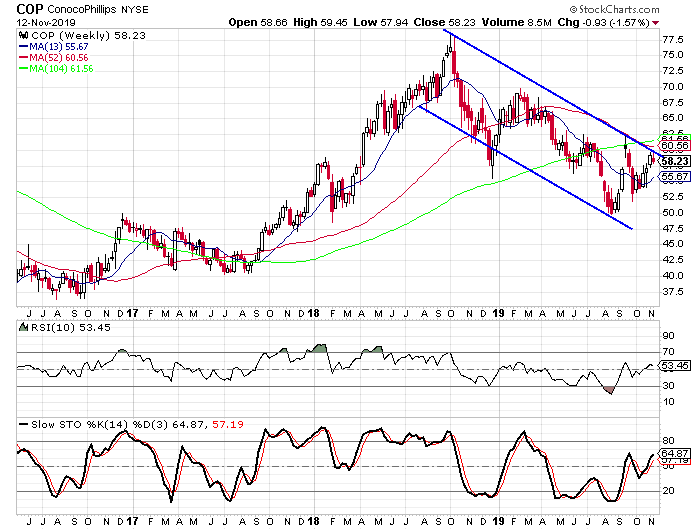 It is also worth noting that the 52-week moving average is just above the upper rail and that means the stock will have to fight through two layers of resistance.

While the technical picture is a concern, the sentiment toward the stock could be an even bigger issue. There are 19 analysts covering the stock at this time with 16 "buy" ratings and only three "hold" ratings. This puts the buy percentage at 84.2% and that is higher than the average buy percentage.

The short interest ratio is at 1.7 currently and that is after the number of shares sold short increased by 11% in the most recent reporting period. Like the buy percentage from the analysts, this indicates extreme bullish sentiment.

From a contrarian perspective, seeing extreme optimism for a stock that is trending lower and doesn't have very good fundamentals is not what you want to see as an investor.

Speaking of the fundamentals, Conoco's are below average at best. The company saw earnings decline by 40% when it reported third quarter results recently and sales declined by 1% at the same time. Analysts expect earnings to decline by 19% for the year as a whole.

Looking at the Tickeron Fundamental Analysis Overview, we see a number of poor ratings. The worst rating is the Profit vs. Risk Rating which is at 100. This rating indicates that the returns do not compensate for the risks. Conoco’s unstable profits reported over time resulted in significant drawdowns within these last five years. 100 is the lowest score a company can get in this rating.

The Tickeron PE Growth Rating for Conoco is also bad with a rating of 81. This rating points to worse than average earnings growth for the company. The PE Growth rating is based on a comparative analysis of stock PE ratio increase over the last 12 months compared against S&P 500 index constituents. A rating of 1 indicates highest PE growth while a rating of 100 indicates lowest PE growth.

When you put all of this together—poor fundamentals, excessive optimism, and a stock price that is trending lower, it doesn't look good for ConocoPhillips to snap out of its downward trend.