Many of the top pharmaceutical companies are working on a vaccination for COVID-19. It seems as if new trial results are released on a daily basis for one drug or another. The global pandemic has certainly changed the fortunes for a number of companies and the attention is obviously warranted.

We don’t have a vaccine yet and there is definitely a race on between big pharma companies to produce a viable vaccine. In the meantime, it seems as if the earnings reports of the companies have taken a backseat to the vaccine research. That may change this week as several major pharmaceutical companies will report earnings on Thursday and Friday. 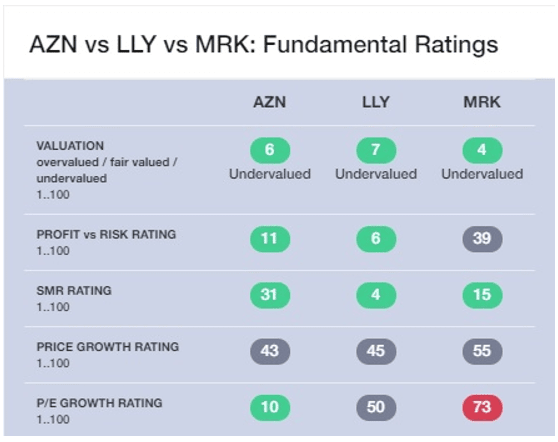 Merck doesn’t do terribly on its fundamental ratings. It has three positive ratings and one negative rating. The negative one is pretty high at 73 and that’s the P/E Growth Rating.

I took note of the fact that all three stocks are considered undervalued at this time and all three have really low scores—single-digit low. The Profit Vs. Risk Rating and the SMR Rating for Lilly are also really low and in the single digits. That helps explain why the stock gets a “strong buy” rating.

Turning our attention to the technical analysis ratings, Astra actually scores a little better than Lilly and Merck doesn’t fare as well once again. Astra gets positive ratings in the MACD, Momentum, and Moving Average categories with negative ratings from the Bollinger Bands and the RSI.

If you look at the weekly charts of the three stocks, Astra was in overbought territory based on a 10-week RSI and the weekly stochastic indicators, but a decline last week moved the stock below overbought levels. Lilly was also overbought based on the weekly stochastic readings, but the RSI hasn’t been in overbought territory since February. With Merck lagging the other two and the overall market, its oscillators are down around the middle of the range at this time. Merck has been grinding sideways between $75 and $82.50 since March.

One of the more interesting things I found when looking at the sentiment was that Merck had the highest buy percentage from analysts. Of the 18 analysts covering the stock, 13 gave the stock a “buy” rating with five “hold” ratings. This gives us a buy percentage of 72.2%. Astra’s buy percentage is 66.7% and Lilly’s is 53.3%.

None of the three short interest ratios (SIR) are very high, but Astra’s is really low at only 0.2. While this isn’t necessarily a negative for the stock, it just means that a short covering rally isn’t in the works.

Looking at all of the data from all three analysis styles, I am in complete agreement with the Tickeron Scorecard. Lilly looks the best of the three for the long-term and I would also consider it a strong buy. Astrazeneca looks good as well and I think a buy rating is accurate. Merck just doesn’t look all that great right now and probably deserves a sell rating or a hold rating at best.